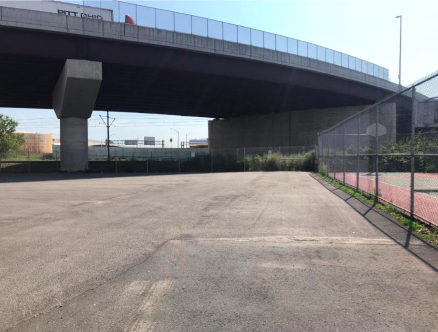 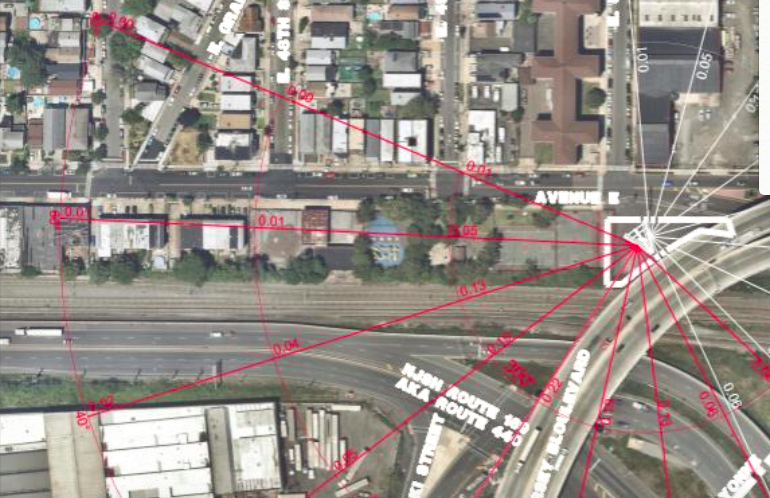 2 / 2
The red and white lines represent the angle of each billboard.
×

2 / 2
The red and white lines represent the angle of each billboard.

At the Sept. 8 meeting, the Bayonne Planning Board approved two billboard projects in undeveloped areas in the city, in addition to a multi-story residential development.

Billboard near the Bridge

BCP LLC will construct a billboard on 2nd Street, between Avenue A and JFK Blvd., in conjunction with the Texaco Redevelopment Plan. The plan was amended in July of 2019 to allow for the construction of the billboard.

It will rise 180 feet in the air, seen by motorists traveling on both sides of Route 440 to and from the Bayonne Bridge. The double-sided billboard itself is 20 feet tall by 50 feet wide.

The billboard will be electronic, powered by LED lights. Images will appear on the screen, flipping to the next image every eight seconds.

If an error occurs, the billboard will go blank, so as not to distract drivers, according to project experts.

There will be no ground access to the billboards, preventing them from becoming “an attractive nuisance to climb on.”

BCP LLC will increase public use and access by upgrading the street and constructing a “pocket plaza.”

2nd Street is an “unimproved” or unpaved road used during the construction of the Bayonne Bridge. By paving it, the developer will create 13 new parking spaces on 2nd Street.

At the meeting, Chairwoman Karen Fiermonte said that improvements were needed at the street level and that this was an opportunity to use advertisements to reach people crossing the Bayonne Bridge.

Reaching motorists on the Turnpike

The planning board approved a billboard uptown near the New Jersey Turnpike at 796, 798-804 Avenue E, also constructed by BCP LLC.

The site used to be a gas station but is now a vacant, paved lot. The city has leased the property to BCP LLC to construct a double-sided billboard.

This billboard has the same dimensions as the one on 2nd Street but will need to be only 95 feet in the air.

The electronic, LED billboard will face motorists on Port Jersey Blvd., a connector road to and from the Turnpike. The base of the billboard at street level will be landscaped.

Commissioner Ashe-Nadrowski voiced concerns over the light produced by the billboard, noting that there is housing nearby on 49th Street.

According to the project engineer, the billboard will face the roadway. The angle of the billboard and the low impact of LED lighting will prevent it from shining light into nearby residents’ windows.

The planning board voted unanimously to approve the billboard projects.

At the July 15 city council meeting, tax abatements were approved for the projects.

Added: According to Ashe-Nadrowski, the developer has paid $1.5 million up front with an anticipated yearly revenue of $500,000 from both billboards. At the meeting, she said it was a real “win for the city.”

The next planning board meeting will be held virtually via TetherView on Oct. 13 at 6 p.m. Residents interested in attending must register beforehand at bayonnenj.org.

A new kind of tax abatement in Bayonne