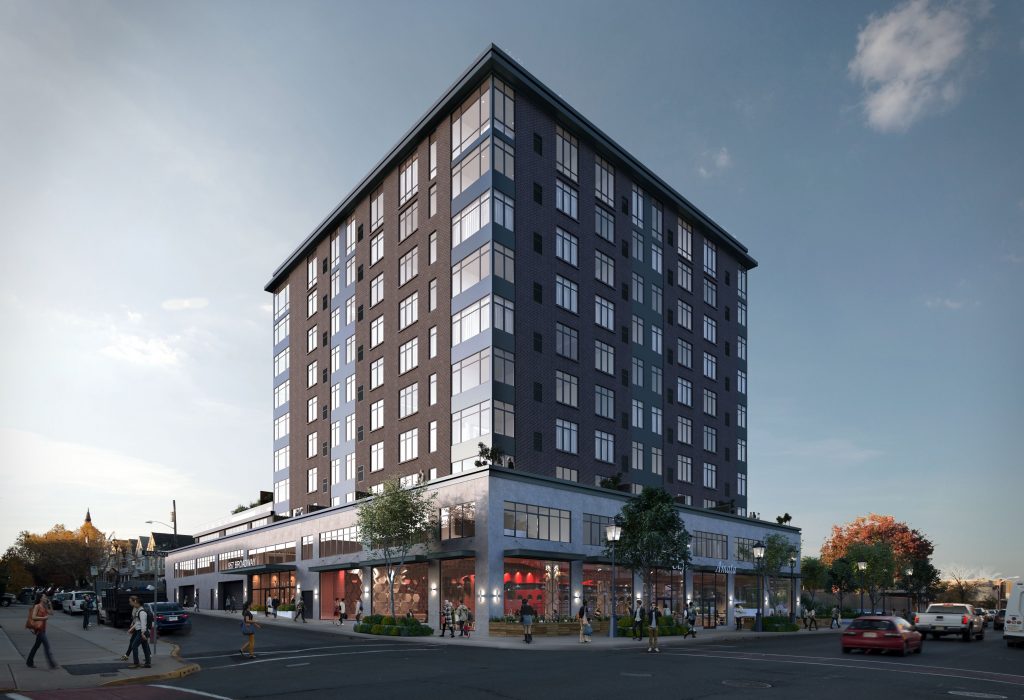 BayOne, at 957 Broadway, opened in 2020 marking the completion of Phase One.

The plan consolidates nine lots into one 20,000-square-foot lot between West 46th and 47th Streets. The lots include 17, 19, and 21 West 46th Street and 14, 16, 20, 22, and 24 West 47th Street, directly west of the BayOne mixed-used residential building at the former site of Resnick’s Hardware on Broadway. Under the plan, the developer is allowed to construct residential buildings of up to eight stories with a maximum of 75 units.

The developer, the L Group, began eyeing the land adjacent to BayOne last January, and the city council authorized a study to determine if the neighborhood was a non-condemnation area in need of redevelopment. The properties include one- and two-family homes on West 46th Street and West 47th Street.

The plan was approved by the board in November. At the Jan. 20 meeting, a letter from a resident in opposing the plan was read into the record during the public hearing.

Craig Leitgeb lives down the street from the redevelopment area on West 47th Street. Leitgeb said he and numerous residents had voiced concerns to the city council about the height of the BayOne building, insufficient infrastructure, and the disruption during construction.

The ten-story building was approved despite their objections. Construction was slated to finish in 2018 but dragged on until 2020.

“. …long years of dirt, noise, street closures, parking disruption, and pollution from the steady parade of dump trucks, cement mixers and heavy construction equipment” Leitgeb said. “Some days, four to five cement mixers would line up at any given moment, idling for long periods of time, spilling diesel fuel in the air.”

According to Leitgeb, there are many elderly residents with health problems in the neighborhood and many young children who were exposed to “the steady diet of diesel.”

Leitgeb said that the city’s Master Plan was supposed to prevent large buildings from encroaching on local neighborhoods or smaller homes.

“While an eight-story building may be appropriate for major avenues like Broadway, such buildings do not belong in the middle of a side street populated with one- and two-family homes,” Leitgeb said.

He continued: ”After enduring the nightmare of this construction for three years, the residents of this neighborhood should not have to endure it again for another building that is completely out of scale with the existing homes in the area. A smaller building, no more than four or five stories, or even townhouses would be more appropriate and preserve the character of the neighborhood. Allowing a tall building like this on a side street will set a precedent and encourage other developers to put such projects on other side streets.”

La Pelusa took issue with the height of buildings.

“I think Mr. Leitgeb said a lot of important things there about the nature of this same builder and what he’s going to do in this neighborhood,” he said.

La Pelusa said that if the ordinance was adopted, the developer should address diesel trucks idling.

“I had to go on the 4th of July and have an argument after I got five phone calls about them pounding and building,” he said. “So I would hope this developer would take heed.”

La Pelusa said even six stories is too high for a side street.

“This is going to be ten lots off the corner,” he said. “It’s definitely the middle of the block.”

‘Too high for the block’

“This is way too high for this block,” La Pelusa said. “It changes the integrity of the neighborhood, which is mostly one- and two-family homes. I get it, we want density on the main avenues. But what was talked about with the Master Plan in the poll, people did not want this.”

“I get it, maybe for density he has to build so much, but other people are finding ways to make money on a four-story or five-story building,” La Pelusa said.

“The project they built on 46th Street, everybody has come up to me saying it’s one of the most beautiful buildings in Bayonne,” Councilman At-Large Juan Perez said. “They have told me that property value has gone up, and they said Bayonne is going into a beautiful renaissance time.”

He voted to adopt the ordinance along with City Council President Sharon Ashe-Nadrowski and Second Ward City Councilman Sal Gullace.

Phase Three in the works

The council authorized a study last January to determine if 11-13 West 47th Street, 12 West 48th Street, and 973-975, 979, 983-987 Broadway qualify as an area in need of redevelopment. On Jan. 12 this year, City Planner Suzanne Mack presented the findings of the study to the Bayonne Planning Board. The area is to the north of BayOne, on Broadway between West 47th and 48th Streets.

The Altamura Bakery at 12 West 48th Street qualifies because it is a commercial space in a residential zone, is in the Urban Enterprise Zone, and because of “smart growth.”

Following the unanimous vote to designate the area as in need of redevelopment, the council will likely vote on an ordinance to do the same at its next meeting and authorize a redevelopment plan.

The next council meeting will be on Feb. 17 at 7 p.m. via Tetherview. For more information, go to bayonnenj.org and click on the event on the calendar.

Helping Black voices be heard in the ferry study