1 / 3
A rendering of the recently approved warehouse of what it will look like when completed. 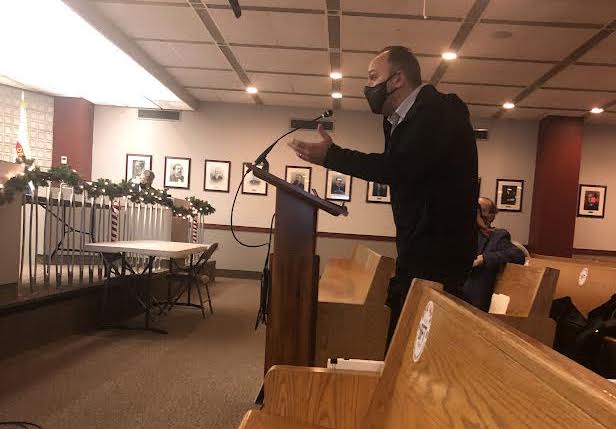 2 / 3
Property owner Francesco Alessi described the project to the board on Dec. 6.

3 / 3
The former PDQ Plastics site will be leveled to make way for the new rail-serviced facility.
×

1 / 3
A rendering of the recently approved warehouse of what it will look like when completed.

2 / 3
Property owner Francesco Alessi described the project to the board on Dec. 6.

3 / 3
The former PDQ Plastics site will be leveled to make way for the new rail-serviced facility.

The Bayonne Planning Board has approved an application to construct a warehouse with office space at the site of the former PDQ Plastics.

At a special meeting on December 6, attorney Lisa John-Basta presented the application to the board on behalf of the applicant 7 Lower Hook Road LLC, owned by Francesco Alessi of the Alessi Organization.

The site was declared a non-condemnation area-in-need-of-redevelopment by the board in December of 2020, later approving a redevelopment plan in April of this year.

Now Alessi is looking to redevelop 7 Lower Hook Road into a 70,350 square foot warehouse with 1,689 square feet of office space along with ancillary improvements.

Samuel Ranero, civil engineer for the project, said the site is located in the southeast corner of the city near the Kill Van Kull.

The 2.3-acre property is completely surrounded by industrial uses, including IMTT properties, which are all rail accessible. The property is currently home to the abandoned PDQ Plastics facility, which will be demolished to make way for the new warehouse and office.

The site will have two entrances off of Lower Hook Road, one to the south for access to the office and one to the north for smaller trucks. There is a loading area on that side of the warehouse as well as a drive-in door. A stacking lane runs along the east side of the building in case there is a traffic overflow.

The rail access will be on the west side of the building, off of the Conrail line. Box rail will park along the side of the facility and unload.

There will be a green roof totaling 10,000 square feet, which may be increased at a later date. Landscaping will be constructed along the southern portion of the building.

Sidewalks will not be constructed at the site, because there are not sidewalks in the area as Lower Hook Road is not suitable for it. But the redeveloper will contribute money for offsite improvements that will be constructed elsewhere in the city, per the redevelopment agreement.

There will be 14 parking spaces at the building, with three on the North side and 11 on the South side. This is less than the 20 spaces required, which was calculated by counting the office as separate from the warehouse instead of one larger entity.

“The ordinance has requirements for warehouse and requirements for office,” Ranero said. “A liberal interpretation would be to make this entire building warehouse because any warehouse has an ancillary office. We decided to take a conservative approach to our calculation. That approach would break that small office in the corner from the rest of the warehouse and add those two together almost like they’re a separate building. That’s why 20 spaces are required. We believe that 14 is adequate.”

The warehouse will bring new jobs but there will only be around 10 employees spread throughout the office and the warehouse, according to project architect Rick Pratt.

“The office of that size might have 3, maybe 4 people,” Pratt said. “A warehouse of this size does not high a high employee requirement. There would probably be 4 people on the dockside, a shipping receiving office with 1 person, 3 or 4 people that are finding stuff or unloading. Then, depending on the company, they might have an executive secretary and a couple of support people. So it’s probably 10 people, not a significant amount.”

The applicant was granted a variance to construct less parking because the site will primarily be serviced by rail, project officials said.

“There’s not a specific end user identified, but we have identified we’re marketing this building toward users that would be rail-related,” Ranero said. “The west side of the building has the rail service, so that would be the main purpose of this building… The users that we’re marketing to would be more for rail and not for 18-wheelers. We would expect the large bulk of deliveries to come by rail.”

The board was confused as to what materials would mainly be transported by rail without any larger trucks. In response, Alessi took the podium to describe the types of users that may occupy the warehouse in the future. An end user has not yet been identified, but they intend to market the building using the rail service provided to the site.

“We don’t have a particular end user,” Alessi said. “We do have an industrial subset of potential for a construction materials facility. The inquiries we’ve received thus far are building that are rail serviced for future distribution by smaller flat-bed or van-type trucks… These would be dimensional lumbers, pieces of lumber, palettes with construction materials such as metal studs, sheetrock, and other ancillary products for distribution by these smaller box trucks or flat-bed trucks.”

Alessi confirmed that the materials would be delivered to the warehouse in bulk, then separated and shipped out to project-specific sites.

An eight foot fence will also be constructed around the site. This is more than the six feet that is permitted. The applicant was again granted a variance because the fence aims to provide security.

In conclusion, project planner John McDonough said that the facility suits the area.

“This is a perfect location for a rail-serviced type of building and business,” said McDonough. “The building that’s there has essentially run out, so investment here in the center of the hook is a good thing from a planning standpoint. We think that is a positive and certainly goes towards the master plan goal for promoting economic development, modernizing the industrial base here in the city and providing for jobs… The benefits are clear, this is going to provide a critical link into the logistics supply chain, a perfect marriage with the physical characteristics of the site… It’s good planning that there’s an emphasis on rail here, as opposed to tractor trailer… We’ve gone from a world that we went to, to a world that comes to us. This serves that element and has certainly grown in currency as we’ve gone through the last two years.”

The board voted unanimously to approve the project.