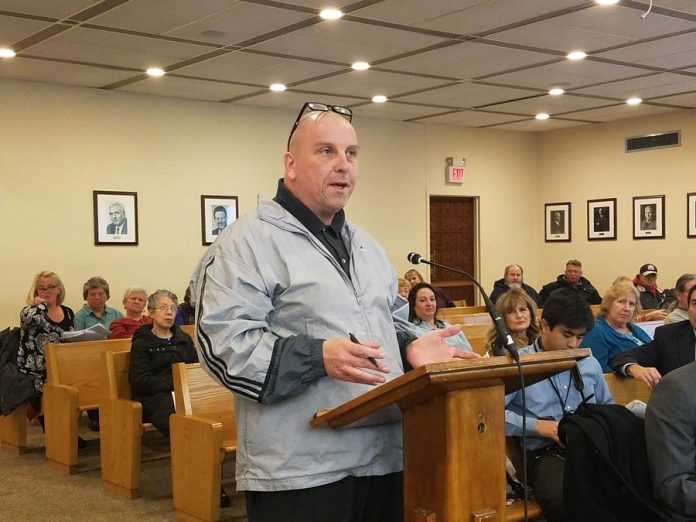 The Bayonne Planning Board approved a six-story, 180-unit apartment building on Avenue F between 23rd and 24th streets at a special meeting on Wednesday, January 4. The building, which Parkview Realty Holdings hopes to complete by 2019, will include 3,000 square feet of commercial space, 189 parking spaces on the first level, and rooftop amenities. It’s expected to house 321 people.
The units, which will be studios and one and two-bedrooms, will be marketed as “luxury” apartments to be rented for “$2,000 and up,” according to Michael Micelli, an attorney representing the developer. The neighborhood is seen as a prime location for new development due to its proximity to the 22nd Street Light Rail Station.

“There are no buildings on the entire East Side that are higher than three stories. It’s like putting a size 8 foot into a size 6 shoe. It just doesn’t fit there.” – Joe Wisniewski
____________

At the public hearing, the Planning Board heard testimony from expert witnesses, who frequently responded to questions from neighborhood residents concerned for pedestrian safety, traffic congestion,and noise. “There are just so many issues going on that a lot of people are unhappy about,” said resident Joe Wisniewski, a frequent critic of large developments on the East Side. “There are no buildings on the entire East Side that are higher than three stories. It’s like putting a size 8 foot into a size 6 shoe. It just doesn’t fit there.” He said he is not “anti-development,” but believes larger developments should be built on the outskirts of town and within the “conformity of the neighborhood.”
Bruce Stieve, an architect, showed renderings of the building. He called it a “new look for this neighborhood” and of a “slightly different character for Avenue F.” The façade will feature red brick and plenty of glass. The retail space, which faces an open plaza, is four stories high and juts out from the main building, jammed between two other Avenue F buildings.
When the architect mentioned the idea of a café in one of the retail spaces, murmurs emanated from the crowd. “They think this is Paris,” said one man, while another chimed in, “I have an idea, let’s build it next to the mayor’s house.” Others just scoffed.
Responding to concerns that the development will bring traffic congestion with it, traffic engineer Craig Peregoy said a traffic study estimated that the building will produce 56 vehicle trips entering or exiting in the morning peak hours, and 78 in the evening peak hours.
His study considered retail space generating some traffic and assumed more people would drive than realistically would, given the anticipated foot traffic to the light rail. “We really wanted to test that intersection to make sure that we’re okay in the future,” said Peregoy, adding that there is “plenty of capacity” to accommodate the increased traffic.
The parking lot on the ground floor includes nine spaces for a vertical-lift parking system for compact vehicles. Melanie Flora, a 25th Street resident, questioned whether the mechanized system would create a line of cars waiting on the street, and whether enough new residents will forgo using vehicles. When Theodore Garelick, Chairman of the Planning Board, suggested that some people choose not to drive cars, Flora responded, “Yeah, in the bimbo land, that’s where.” She insisted, “In the real world, they have four-wheel-drives and pickups.”