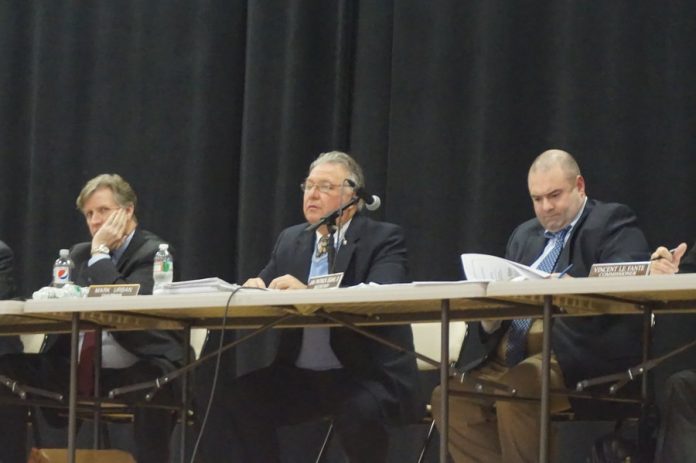 Zoning Board to vote on mosque March 6

The Bayonne Zoning Board is scheduled to continue its hearing to vote on major site plan approval for a new Muslim Community Center. The meeting will be at Bayonne High School on March 6 at 6 p.m. The last meeting, held on January 23, ended after five hours with one expert witness left to testify, along with the public comments portion.
Bayonne Muslims, a nonprofit organization, has been renting the basement of St. Henry’s School on Avenue C for community and prayer services for six years. The group proposed to convert what is currently an unoccupied warehouse on the East Side at 109 East 24th Street into a community center, including a mosque, classrooms, and a soup kitchen.
At the meeting on the 23rd, opponents of the plan cited concerns about traffic and noise. Residents asked how long and frequent prayers might be, how much traffic increase they can expect, and whether mosque-goers will be walking through their yards.
In October, a Bayonne man vandalized the façade outside the entrance to the Muslim Community Center on Avenue C with spray paint, writing hateful and Islamophobic slurs, as reported by the Bayonne Community News. Jonathon Hussey, the man responsible, was sentenced to 12 months’ probation on January 3. As part of his probation, according to a statement from the Hudson County Clerk, Hussey penned an apology to both the Muslim Community Center and St. Henry’s Church.

City to break ground on 19 East

On Monday, February 13 at 1 p.m., Mayor James Davis, the city council, and Ingerman Development Company will hold a groundbreaking ceremony for the “19 East” development on 19 East 19th Street.
Crews were on 19th Street in early January demolishing the vacant Housing Authority building to make way for the new development. The building is an unusual shape. It will be perpendicular, with one part starting on 19 East 19th Street and extending into the center of the block and then back out to Broadway.
The building should appeal to the young market, which puts a premium on walkability and public transportation to Manhattan. The new building will be within walking distance of the 22nd Street Light Rail and Broadway commerce. According to Ingerman, plans include 212 parking spaces on the bottom two floors, and 138 luxury units – 24 studio apartments, 74 one-bedroom apartments, and 40 two-bedroom apartments. 19 East is expected to be completed in late 2017 or early 2018.

New Jersey Senator Cory Booker and his staff are bringing theirmobile office to Bayonne on Wednesday, February 8 from 11 a.m. to 2 p.m. in the City Hall lobby to hear his constituents’ voices and concerns. The senator’s staff holds mobile office hours across the state. This year, Senator Booker’s staff has held mobile office hours in each of NJ’s 21 counties. To voice concerns to your senator, visit his website at booker.senate.gov, call his Newark office at (973) 639-8700, or tweet him @CoryBooker.

Mayor James Davis and Bayonne Fire Chief Keith Weaver announced that that City accepted the donation of 11 sets of firefighter turnout gear from IMTT.
Representatives of IMTT, including Terminal Manager Michael Morganti presented Mayor Davis, Fire Chief Keith Weaver, and Deputy Fire Chiefs Stephen Peterson and William Bartos with turnout gear valued at nearly $30,000.
“This donation is greatly appreciated and shows just how exceptional IMTT is as a corporate neighbor,” said Mayor Davis. “This turnout gear is critical for keeping our firefighters safe when they come in contact with hazardous conditions in the course of their duties.”
“Safety is of utmost importance, and this gear will go a long way in keeping our firefighters safe. Many thanks to IMTT for their continued partnership with the Fire Department and City of Bayonne as they support our efforts,” said Chief Weaver.

Eight Bayonne High School seniors were selected as recipients of a full scholarship to attend the EMT-Basic Certification Course at Jersey City Medical Center in the Spring of 2017.
In the inaugural year of the Academy for Health and Medical Sciences at Bayonne High School, the EMT Certification Scholarship Program was developed by Superintendent of Schools Patricia L. McGeehan as a highlight of the newest Academy and provides real world job training to prepare students for careers.
Scholarship recipients will attend classes at the Jersey City Medical Center EMS Training Center in Jersey City every Tuesday and Thursday evening, and for several full Saturdays, culminating in a total of more than 220 hours devoted to theory and hands-on practice of the skills necessary to work as an Emergency Medical Technician. Students will sit for the New Jersey EMT Certification exam in June and, if successful in completing the course and examination, be eligible to work professionally as an EMT upon graduation from high school.
The Scholarship Program through the Academy for Health and Medical Sciences at Bayonne High School covers the full cost of tuition for the Spring certification course, medical supplies required for the course, uniform costs, and transportation from Bayonne High School to the EMS Training Facility for each course. Funding for the scholarships is made possible through the support of the generous community patrons of the Academy for Health and Medical Sciences, including IMTT, the Bayonne Education Foundation, and Investors Foundation. The EMT Scholarship recipients, as well as all students enrolled in Academy for Health and Medical Science courses at Bayonne High School, receive hands-on practical training through the Clinical Skills Lab sponsored by Jersey City Medical Center and RWJBarnabas Health.

The Bayonne Education Foundation, in partnership with KP Sarelli’s Restaurant and BCB Bayonne Community Bank, is thrilled to once again bring the world famous Harlem Wizards Basketball Team to Bayonne.
The Harlem Wizards brand of “Trick Hoops and Alley Oops” will be coming to Bayonne on Sunday, February 12 at 2 p.m. in the Main Gym at Bayonne High School.
The Harlem Wizards have been packing gyms for more than 50 years, and this event will be no exception. This world-famous basketball team will face off against a team of Bayonne Public School District teachers and administrators representing each district school. Bring the whole family for an afternoon packed with pre-game entertainment, refreshments, and Harlem Wizards souvenirs.
Ticket order forms can be obtained at each elementary school, or you can order tickets online at www.harlemwizards.com. Tickets are $8 for Children/Students, and $10 for Adults.
This community-wide event is a great way to support the students of the Bayonne Public School District. All funds raised from the game will go directly toward supporting innovative and creative after-school or summer programs for our children district wide.

In last week’s briefs, The Bayonne Community News reported that the City Council passed a tax abatement for a development on Broadway and 46th Street, where Resnick’s Hardware currently stands. The Council only introduced this resolution. They did not pass it. The City Council will hold a public hearing at its regular meeting on February 15.
The site at Resnick’s, which is being developed by local developer Lance Lucarelli, was approved last year and is expected to be completed sometime in 2018. The 10-story, 107-foot building will house 91 apartments, 150 parking spaces, and retail space on the ground floor.
Tax abatements allow developers to forego local taxes, and instead make payments – 95 percent to the municipality and 5 percent to the county. They are designed to incentivize development by making it more profitable for developers to build, and stay there without the burden of taxes.

On Memorial Day, Remember Those Who Made the Ultimate Sacrifice