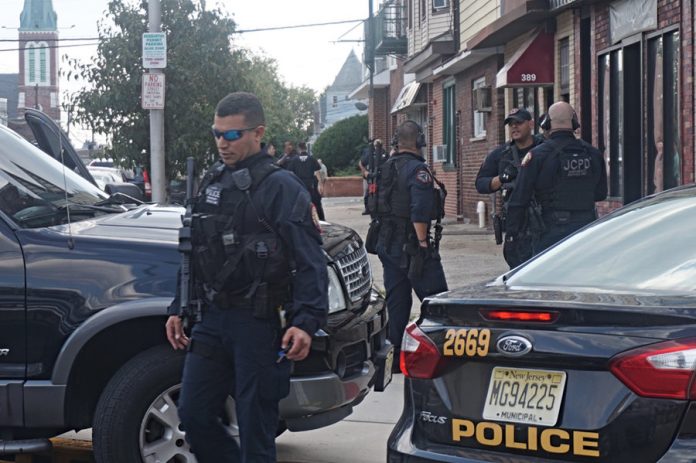 The Jersey City Police Department arrested two people in Bayonne on Thursday, August 24 who were wanted in connection with a shooting that took place earlier in the day on Martin Luther King Boulevard in Jersey City and resulted in no injuries, according to officials.
Hakeem Lester, 29, and Vanessa Marko, 36, were arrested at their apartment on Avenue C and 16th Street. Both were charged with unlawful possession of a weapon, possession of drug paraphernalia, possession of a controlled dangerous substance, and endangering the welfare of a child, who was in the apartment at the time of arrest.
Police with machine guns roamed up and down the block between 16th and 17th Streets on Avenue C on Thursday afternoon, causing a stir in the community.
“All these police came out of nowhere, like in the Matrix,” said Jamal Steven, an Avenue C resident who recently moved to Bayonne from Jersey City. “I left there to come here where it’s peaceful, but I guess it’s like this everywhere.”

In the August 23 issue of the Bayonne Community News, we published a picture of Peter Franco but did not quote him in the story. He did not engage in name-calling or threats at the August 16 city council meeting. He told BCN that he objects to the name-calling and threats that were in evidence at the meeting.

In the August 23 issue of the Bayonne Community News, in the Briefs section of the paper, we mistakenly reported that the water at the 5th Street Pumping Station is pumped to the Passaic Valley Water Treatment Plant.

A man in a white Lincoln Towncar was digging through his pockets for the key to his car when it fell through his fingers, evading any solid surface, and into a sewer drain on Broadway and 22nd Street on Thursday, August 24. A group of five firefighters came to the rescue, lifting the heavy steel sewer cover to recover the keys. Aside from rescuing keys from sewers and cats from trees, the BFD has recently responded to issues of “water leaks, building lockouts, and a shopping cart stuck somewhere. “I had a kid whose finger was trapped in the ring inside the toilet bowl,” said Captain Frank Pawlowski. “We’re always happy to help.”

The nine employees of the City of Bayonne named in a complaint filed in April by former Business Administrator Peter Cresci were dismissed last week at the Hudson County Superior Court by Judge Christine Vanek in a motion for summary judgment. Most of the employees named in the complaint were already exempt by the existing residency statute that gives exception to lawyers, police officers, firefighters, and teachers. Judge Vanek ruled that the remaining employees did not have affirmative control over their positions. The City of Bayonne is now the sole defendant in the complaint.
The Bayonne City Council revised the city’s residency ordinance at a meeting on August 16 that exempts those hired prior to October 1, 2017, from having to live in the city, while requiring new hires moving forward to live permanently in Bayonne either at the time of, or within one year of, employment.
That ordinance, however, was not considered in Judge Vanek’s ruling. The city will be required to submit its answer to the summary judgment by September 1.

When first elected in 2010, Gov. Christopher Christie blocked the New Jersey Schools Development Authority from moving forward with any school construction projects until an audit of the agency could be completed and the agency overhauled, which delayed school construction projects for years. Now, WNYC reports the latest round of approvals from the N.J. Department of Education will fund only 5 percent of the 429 applications received.