Film festival brought out the stars 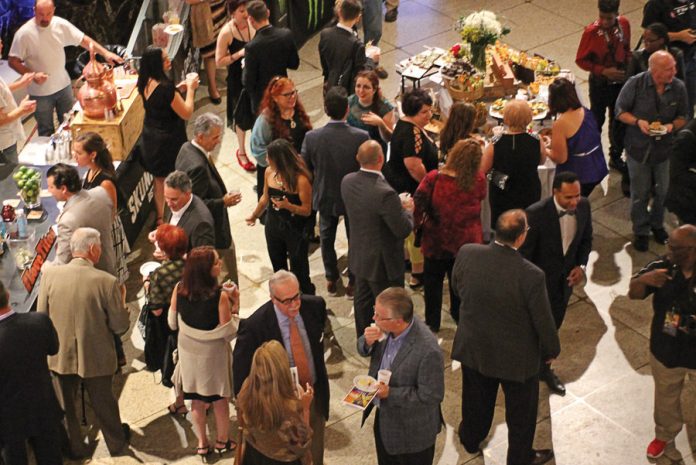 Every year, the Golden Door International Film Festival draws a lot of talented people. Some filmmakers are local talent, but many come from around the globe. And since its foundation about six years ago, the festival has sometimes brought out unexpected guests.
One of these who came out for opening and closing nights was Federico Castelluccio, who along with Emmy-winner Michael Badalucco (David E. Kelley’s “The Practice”) is set as a lead in Marlyn Bandiero’s indie film “Blue Betrayal,” inspired by true events about a family man who loses everything after he is betrayed by his partners.
Known for his role in “The Sopranos,” Castelluccio is s an internationally renowned realist painter, art collector and connoisseur of old master, baroque painting. Although born in Naples, Italy, Castelluccio had a studio near Kearny for a while.
Castelluccio recently made his film directorial debut with “The Brooklyn Banker” starring Troy Garity and Paul Sorvino. This may explain why he came to Golden Door. Paul’s nephew, Bill, is one of the founders.
Domenica Cameron-Scorsese, daughter of Martin Scorsese, directed the film “Almost Paris.” Abigail Hawk , an actress and director, known for “Blue Bloods,” “A Christmas in Vermont” as well as “Almost Paris,” also appeared at the closing event on Oct. 8.
Some of the judges at the festival included equally accomplished people such as Christian Keiber, who had a recurring role on “Charmed” and acted in the TV series “Orange is the New Black.”
Gary Donatelli, an Emmy Award-winning director was also a judge, along with Lifetime Network star, Kerry McGanna, award winning director Donna McKenna, actors Garry Pastore,
Yvonne Maria Schaefer, and HBO’s Maureen Van Zandt.

Films throughout the city

The festival featured more than 170 films over four days at venues throughout Jersey City.
Founded by Jersey City native Bill Sorvino, and named as the Best Film Festival in the state by NJ Stage Awards two years in a row, GDIFF brought some the best of independent filmmaking to audiences, and also has a philanthropic mission to raise autism awareness through cinema.
“As a film actor, it occurred to me that a film festival was just the thing to help shine the spotlight on my beloved city,” Sorvino said. “Our overarching dream is to see Jersey City recognized as a nexus for film production, and also to shine that very spotlight on affected individuals who rather than disabled, we consider uniquely gifted.”
“The Girl Who Invented Kissing,” with the tagline Every town needs a savior, but not every town can be saved won four awards including Best Feature Film, Best Actor (Dash Mihok), Best Supporting Actor (Vincent Piazza), and Best Director (Tom Sierchio, a Bloomfield native.) “Almost Paris” directed by Dominic Cameron-Scorsese, took three awards, including Best Actress (Abigail Hawk), Best Supporting Actress (Susan Varon), and Best Screenplay (Wally Marzano-Lesnevich).
“Brooklyn in July” won Best Feature, Best Director (Bob Celli) and Best Actor (Thaddeus Daniels) in the Short Film category.
Other winning entries included best LGBT, “Easy, A 3 Minute Love Story;” Music Video, “Jersey Christmas;” Best International Short Film, “Lonely Souls of Microbes;” Women in Cinema, “Flush the John;” Films For Raising Awareness, “Amazing Things Happen;” Best Editing in a Feature Film, “Good Bones;” Cinematography in a Feature Film, “Bird;” Actress in a Short Film, Linda Hamilton in “Shoot Me Nicely;” Best Concept in a Short Film, “Shoot Me Nicely;” NJ Filmmakers of Tomorrow, “Give Love;” Student Film, “The Next Epoch Seed Library;” Local Film, “Based on True Events,” and Documentary, “The Bullish Farmer.”