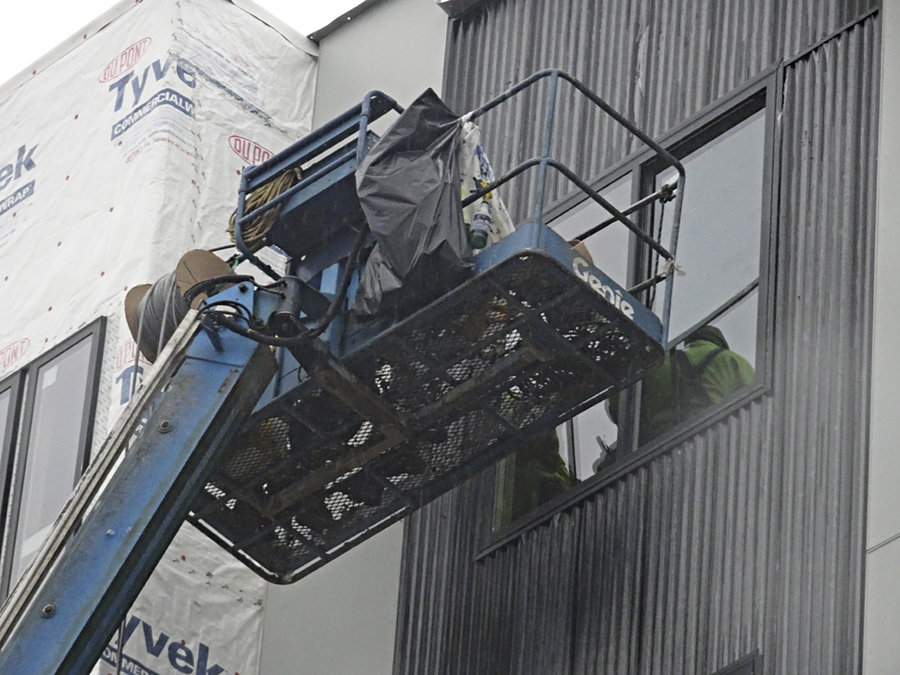 Tax abatements and PILOTs have been key talking points in Bayonne’s mayoral election, which will take place on May 8. Meanwhile, development like this one on 19 East 19th Street are shooting up.
×

Tax abatements and PILOTs have been key talking points in Bayonne’s mayoral election, which will take place on May 8. Meanwhile, development like this one on 19 East 19th Street are shooting up.

“Secret deals with big developers, sky-high buildings in local neighborhoods, and backdoor tax breaks,” reads a pro-Jason O’Donnell Facebook political ad sponsored by Stronger Foundations, Inc. a group known for spending on elections in Hoboken, Jersey City, and other NJ municipalities. The ad also appeared on television and other digital platforms.
The organization has spent on behalf of the International Union of Operating Engineers (IUOE) Local 825, which represents engineers in NJ and parts of NY, and endorsed Jason O’Donnell for mayor in November.
O’Donnell is campaigning largely against tax abatements and PILOTs, which Mayor James Davis has defended. A column Davis wrote on March 14 is a succinct summary of his message on the campaign trail. “Smart development means recapturing land that has been dormant for generations and returning it to the tax rolls…Smart development also means getting the developer to invest not just in their building but in our city. That has been done under my watch.”
Since the 2010 Citizens United Supreme Court case that allowed Super PACs to raise unlimited funds without disclosing donors, money in politics at every level has exploded, according to OpenSecrets.org, a nonprofit that tracks political spending.
O’Donnell told the Hudson County View that his campaign has no connection with the PAC, but supports its message.

The North Bergen Housing Authority (NBHA) has removed Geoffrey Santini as its security director, according to a statement from town spokesman Phil Swibinski. Santini’s termination came from an investigation the NBHA launched, after an NBC report last month alleged he misused an Authority SUV for personal purposes, and seldom showed up to his job.
“After consulting with the Special Counsel investigating this matter, North Bergen Housing Authority Executive Director Gerald Sanzari terminated the employment of Director of Security Geoff Santini on March 28, 2018,” Swibinski said.
“NBHA’s internal investigation into the matter is ongoing and the Housing Authority will also fully cooperate with any inquiries being made by outside agencies.”
The NBC report also alleged that Santini–also an animal control officer for many North Hudson towns–often used the SUV for work at his West New York animal shelter. Santini lost his animal control contract in Garfield because of the report.
His contract with Bayonne could also be in trouble. On April 18, the Bayonne City Council will decide whether to keep Santini or switch animal services to the Liberty Humane Society.

A referendum petition on Bayonne’s new residency ordinance passed muster before a Hudson County judge last week after city officials claimed the petition did not have enough valid signatures. Hudson County Assignment Judge Peter F. Bariso ruled that the petition is certified. Now the City of Bayonne must eitherremove the changes it made to the ordinance last August or determine residency requirements by a ballot referendum.
The revised ordinance passed in August requires city employees hired after October 1, 2017 to live in Bayonne, except for positions that are statutorily exempted. The revision, which exempt those hired prior to October 1, will affect new hires moving forward who will be required to live permanently in Bayonne either at the time of, or within one year of, employment.
The revised ordinance came after local attorney and former Bayonne Business Administrator, Peter Cresci, and resident, Mike Morris, filed a complaint in April of 2017 against the City of Bayonne for violating the ordinance. A number of defendants named in the complaint were dismissed by the court because the state statute specifically names their positions as exemptions to the rule. The legal complaint asked that employees in violation either quit or be required to move to Bayonne.

The U.S. Department of Labor this week announced an agreement in which the owner of 15 Houlihan’s restaurants in New Jersey will pay out $5 million in back wages and damages to 1,000 workers, according to the Record. The settlement was reached after two lawsuits were filed, one in NJ and one in NY, against the owner, Arnold Runestad of Bergen County. The suit alleges that the owner pocketed more than $40,000 in tips from employees at Houlihan’s locations in Bayonne, Brick, Bridgewater, Cherry Hill, Eatontown, Fairfield, Holmdel, Lawrenceville, New Brunswick, Metuchen, Paramus, Ramsey, Hasbrouck Heights, Weehawken and Secaucus.
A U.S. Labor Department investigation found that the restaurants allegedly denied overtime pay to employees at multiple restaurants and included employees not reliant on tips in a mandatory tip pool, effectively shortchanging employees making less than minimum wage. The investigation also allegedly found the employer did not regularly pay overtime or pay staff for all hours they worked. The employer allegedly regularly deducted money from paychecks to cover meals while still charging employees for the food.
The labor department allegations came after a Woodbury Heights server filed a class action lawsuit in June of 2015 that accused A.C.E. Restaurant Group, which owns the Houlihan’s chain, of violating the Fair Labor Standards Act.

A 33-year-old Bayonne woman was sentenced on March 23 to serve 15 years in a state prison after pleading guilty to fatally stabbing a 34-year-old man inside a vehicle near the New Jersey Turnpike, according to court records.
Amarlis Calderon, 33, stabbed fellow Bayonne resident Pablo Caamano, after he stopped to pick her up in Woodbridge during the early morning hours of July 18, 2016, according to the Middlesex County Prosecutor’s Office.
Caamano, 34, was a construction project manager and Seton Hall University graduate. He was the “beloved son of Maria… and Manuel Caamano” and a lifelong Bayonne resident, according to an obituary.
“I will always remember Pablo’s infectious smile and personality,” wrote a friend on the online obituary. “He was an extraordinary man who will be deeply missed. May he rest in peace.”

The Hudson County Community College (HCCC) Department of Cultural Affairs continues its year-long partnership with New Jersey Performing Arts Center (NJPAC) Department of Community Engagement with a special “Twilight Tuesdays” event. The NJPAC Alvin Ailey Presentation is free of charge and open to the public, will be held at 5:30 p.m. on Tuesday, April 10 in the Atrium of the College’s Dineen Hull Gallery.
The gallery is located on the sixth floor at 71 Sip Ave. just one block from the Journal Square PATH Transportation Center in Jersey City. Children under the age of 18 years must be accompanied by an adult.
NJPAC teaching artist Theara Ward will present a short film and talk on the Alvin Ailey Dance Company followed by a dance demonstration featuring trademark movements from Ailey’s signature ballet, “Revelations.”
Information about the HCCC Department of Cultural Affairs Spring 2018 programs and events is available at www.hccc.edu/cultural-affairs or by contacting Michelle Vitale at (201) 360-4176, or emailing mvitale@hccc.edu.

Legislation sponsored by state Senators Nilsa Cruz-Perez and Sandra Bolden Cunningham that would allocate funds for training of minorities and women in the construction industry has cleared the Senate.
“Our cities are currently going through a bit of a construction boom. We need to do more to have workers hired from cities where projects are located, which will promote job growth and skills training,” said Senator Cunningham (D-Hudson). “This will be helpful for those who live in the cities, as they could become employed to become a part of the construction projects that are changing their skylines.”
The second bill, S-347, would reconcile two laws that have similar purposes revolving around the training of women and minorities in the construction industry for projects costing $1 million or more. The projects would have to be funded wholly or in part by the “American Recovery and Reinvestment Act of 2009”.
The bill was released from the Senate with a vote of 35-0, and next heads to the Assembly for further consideration.

On March 27, representatives from CarePoint Health and the Hudson Pride Center, along with Jersey City Mayor Steven Fulop and Assemblyman Tim Eustace (NJ-38), announced a partnership to expand access to healthcare for the LGBTQ community at Christ Hospital.
As part of the effort, inclusive policies and procedures for patients and employees will also be developed to ensure best practices. This will include LGBTQ sensitivity and cultural competency training, as well as increasing services to the LGBTQ community.
The announcement was made during national LGBTQ Health Awareness Week, held this year March 26-30, which focused on bringing attention to health care disparities that affect the lesbian, gay, bisexual, transgender and questioning (LGBTQ) community.
“Studies show that LGBT individuals have unique healthcare issues and experience certain health challenges at higher rates than the general population,” said Dr. Tucker Woods, Chief Medical Officer at Christ Hospital. “By partnering with Hudson Pride, we will be able to work together to face the challenges and barriers to accessing needed health services.”
Dr. Woods noted that employees at the healthcare system – which also includes Bayonne Medical Center and Hoboken University Medical Center – have formed “CarePoint Pride,” a group to start the work necessary to address the goals and objectives of this alliance with Hudson Pride.
Earlier last month, Hudson Pride temporarily relocated its offices to Christ Hospital until it moves to its new home on Newark Avenue in downtown Jersey City.

A bill is being considered in the state Assembly that would force New Jersey parents to explain exactly how required vaccinations for their children interfere with their religion, according to reports from NJ Advance Media. Under current law, parents can opt-out of required vaccines simply by writing a letter that says the drugs “interfere with the free exercise” of their religious rights.

With the deadline to fileto run for federal office passed on Monday, Sen. Bob Menendez picked up a primary challenger, community newspaper publisher Lisa McCormick.
Since 2006, McCormick has owned CMD Media, which publishes a community news website formed by combining the Clark Patriot, South Amboy Citizen, Perth Amboy Gazette, the Atom Tabloid, and the News Record. She previously announced a campaign for the 2017 governor’s race but never ran.