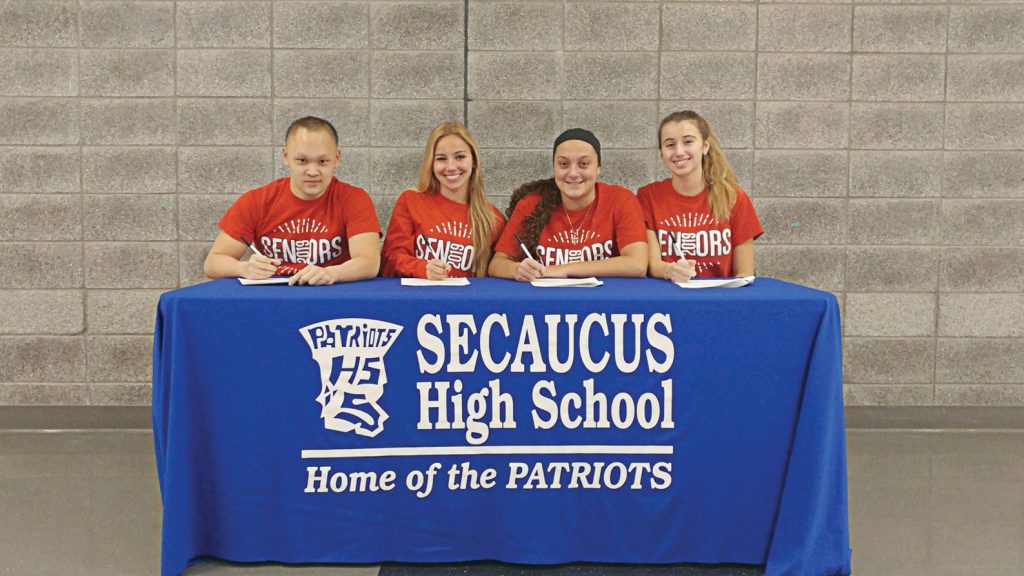 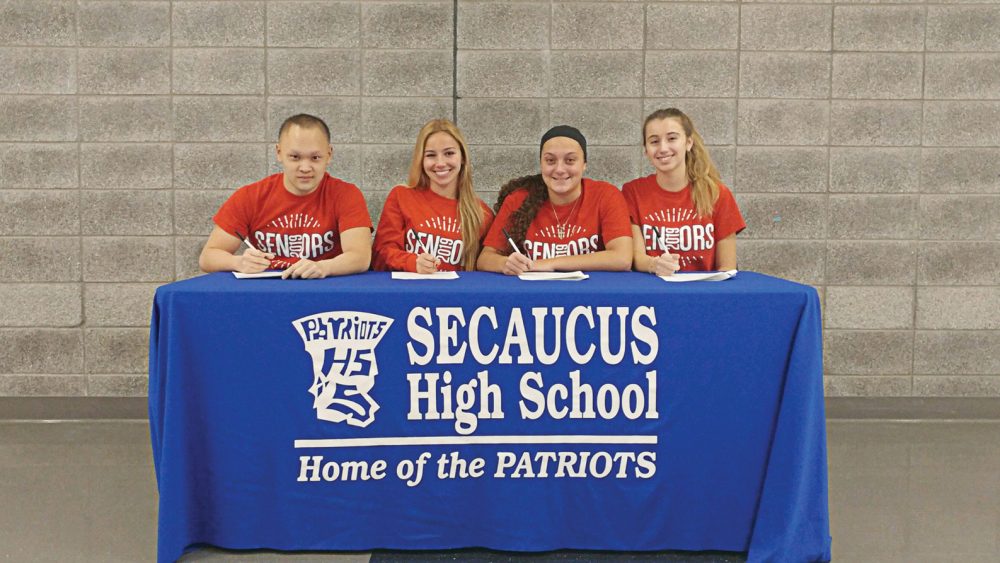 Editor’s note: Last week was the early signing period for athletes accepting scholarships and signing National Letters of Intent with their respective schools. This is a journey around Hudson County and the respective scholarship recipients.

In all the 30-plus years of covering sports in Hudson County, we never came across an equestrian to grace the sports pages.

With that in mind, welcome Jordan DeFalco, a Secaucus High School senior who signed a National Letter of Intent with Sacred Heart University in Connecticut to join that school’s equestrian team.

DeFalco has been riding horses since she was six years old and started taking riding lessons when she was about seven.

“A bunch of my friends were riding, so I decided to try it,” said DeFalco, who played youth soccer as a kid, but riding horses more enjoyable. “Once I started, it stuck. Once I took my first lesson, I was hooked. It was fun.”

Since those early days, DeFalco travels south to Tewksbury, where her 12-year-old horse Mardi Gras is stabled.

“I basically train two days a week there,” DeFalco said. “I’ve done that through high school.”

After she began competing in show jumping events, DeFalco realized that there were some schools that offered scholarships in equestrian. Sacred Heart was one of those schools.

“There were other Division I programs in South Carolina and Texas, but Sacred Heart was closest to home,” DeFalco said. “So I was intent on going to Sacred Heart to compete.”

DeFalco and her family now own Mardi Gras.

“He’s my teammate,” DeFalco said. “Having him with me relaxes me. The chances I get to compete with him are amazing. We’ve created a small bond.together. I think I have to rely upon him more than I could relying on teammates.”

DeFalco will continue to compete in shows while at Sacred Heart, studying physical therapy.

DeFalco was just one of four Secaucus athletes to sign letters last week.

Ulrich, who will begin her senior year with an astounding 1,613 points, hoping to become Secaucus’ all-time leading scorer, knew that she was headed to St. Leo after her first visit.

“Once I went to St. Leo, I knew it was the school I wanted,” Ulrich said. “They made me feel so comfortable. The school is gorgeous and the basketball program is growing. It feels good not having to worry about where I’m going to school. It’s a big thing off my chest. It’s going to make me work harder this year. It’s a dream come true. I accomplished my dream. I couldn’t be happier.”

Ulrich doesn’t know what she wants to do past her basketball career. She might want to become a police officer or become a teacher, working with little kids.

The other two letter signers from Secaucus are both swimmers, namely David Son and Carlee Sanchez-Hegarty.

Son started swimming at a young age and realized he was getting better at it soon after.

“I realized that I had a chance to go to college when I was in middle school,” said Son, who signed his letter of intent to attend Iona College next fall. “I was faster than all the kids at my grade level.”

Son said that he started to receive letters from schools last year.

“I liked the academic opportunities in Iona,” said Son, who will major in accounting. “The whole atmosphere there was tremendous. It was like a family. I liked it so much. There’s so much stress off my shoulders now. I can just concentrate on my swimming.”

Son competed in the Meet of Champions last year.

Sanchez-Hegarty is headed to the University of Tampa to swim. She will be within close proximity of Ulrich.

“I just felt at home there,” Sanchez-Hegarty said. “My grandparents live about 90 minutes away from school. It’s right on the bay. It’s so nice there. Throughout September and October, I was so stressed out about where I was going to go. Now, I’m stress free. It’s amazing. I feel happy and normal now.”

Sanchez-Hegarty said she was glad to share the day with her classmates.

“Jordan and I are best friends,” Sanchez-Hegarty said. “David and I swim together. It’s all great.”

“It’s great that we can all share in this together,” DeFalco said. “I love it.”

So does Secaucus. It was a proud day for all.

Jim Hague can be reached via e-mail at OGSMAR@aol.com. You can also read Jim’s blog at www.jimhaguesports.blogspot.com and follow Jim on Twitter @ogsmar.