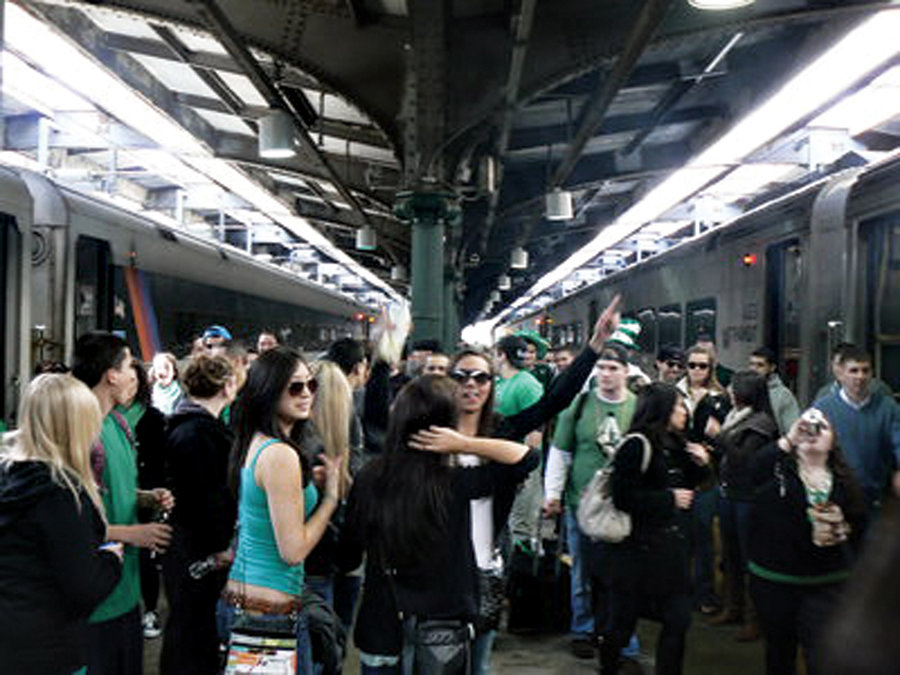 The annual LepreCon bar crawl will take place on Saturday, March 2. People from all over the tristate area don shades of green to participate in the crawl, which typically attracts thousands of revelers.

Members of the public can attend a community meeting regarding the preparation of a redevelopment plan for the North End Rehabilitation Area on Thursday, March 14 at 7:00 p.m. at Wallace Elementary School (1100 Willow Avenue).

The purpose of the meeting is to get feedback from the community in order to create a North End Redevelopment Plan, which will establish the development standards for Northwest Hoboken.

At the community meeting, residents will be able to provide input on what should be incorporated into a plan for the North End area, including the creation of parks and public amenities, flood mitigation techniques, and development of a potential light rail station.

The North End Area is located in the northwestern corner of the city bounded by the 14th Street viaduct to the south, Park Avenue to the east, 17th Street to the north and the Palisades Cliffs to the west.

For more information on the Hoboken North End Redevelopment Plan, visit the project website at https://northendredev-cityofhoboken.opendata.arcgis.com

All electricity will be purchased through renewable sources including solar and wind, as opposed to nuclear and fossil fuels like coal and petroleum.

Hoboken is one of the first municipalities in New Jersey to adopt 100 percent renewable electricity in municipal buildings.

Now, 28 percent of Hoboken’s clean, renewable electricity for municipal operations will be generated within New Jersey by wind and solar energy, while 72 percent will be supplied by wind energy generated out of state.

The renewable electricity will also save money with a projected nine percent decrease in cost over two years.

Mayor Bhalla also signed a pledge committing to a goal of 100 percent clean, renewable electricity community-wide. The pledge is part of the Sierra Club Mayors for 100 Clean Energy Campaign. To this end, the city will launch a program to enable residents to purchase renewable electricity for their own homes.

On Saturday, March 9 at 10 a.m. the Fund for a Better Waterfront, Hoboken Cove Community Boathouse, and Resilience Paddle Sports will host a march and rally to save the Union Dry Dock.

The former Union Dry Dock site was purchased by NY Waterway to become its ferry homeport for maintenance and refueling. Residents and local officials have said they want the property to become public open space citing health, safety, and environmental concerns.

The march and rally will “send a message to Governor Murphy that this is absolutely the wrong place for this kind of activity at this unique, ecologically important site, especially given the fact that there are other far more suitable locations for this ferry facility.”

The March will begin at Pier A Park at First Street and Sinatra Drive at 10 a.m. followed by a rally at Maxwell Place Park. All are welcome.

Hoboken’s 10th annual Chili Cook-Off & Craft Beer Contest will take place on Saturday, March 9, from 2 p.m. to 6 p.m. at Our Lady of Grace at the corner of Fourth Street and Willow Avenue.

The event is hosted by TRUE Mentors, Hoboken’s only one-to-one mentoring organization, and 100 percent of the proceeds will go towards funding free mentoring programs for local children.

In the past year the non-profit doubled its number of 1:1 matches; hosted nearly 100 clubs, workshops and field-trips; moved to a new home in the Jubilee Center; expanded its thriving Teen Internship Program by 40 percent and achieved an impressive 100 percent college acceptance rate.

Attendees will be able to sample some of the best chili recipes and craft beers in the area and listen to live music by Gravy Train.

Tickets cost $45 and can be purchased online at https://tinyurl.com/y4xgg6pu.

HobokenGirl is hosting their annual formalwear drive and sale next month with all proceeds going to Dress for Success Hudson County.

Donations of formal dresses, formal shoes, suits, tuxes, jewelry, and unused beauty products/nail/hair care are being accepted at different spots around the city through March 28, with the community sale on March 30.

Dresses will be for sale for $5, jewelry is $3 per item, and makeup products are $1 each.

For more information go to https://www.hobokengirl.com/hoboken-girl-formalwear-drive-community-hoboken-jersey-city-2019/

Party with Purpose has an opportunity to receive a donation from the PGA tour if they can recruit 40 volunteers.

Volunteers would need to commit to three six hour shifts and pay an $87 volunteer fee which includes access to the tournament, six guest tickets, an official tournament cap and golf polo, and more.

To volunteer register online at https://events.r2it.com/volunteer/northerntrust/2019/

Select “Party with Purpose” as the recruiting organization.

For more information about the tournament go to