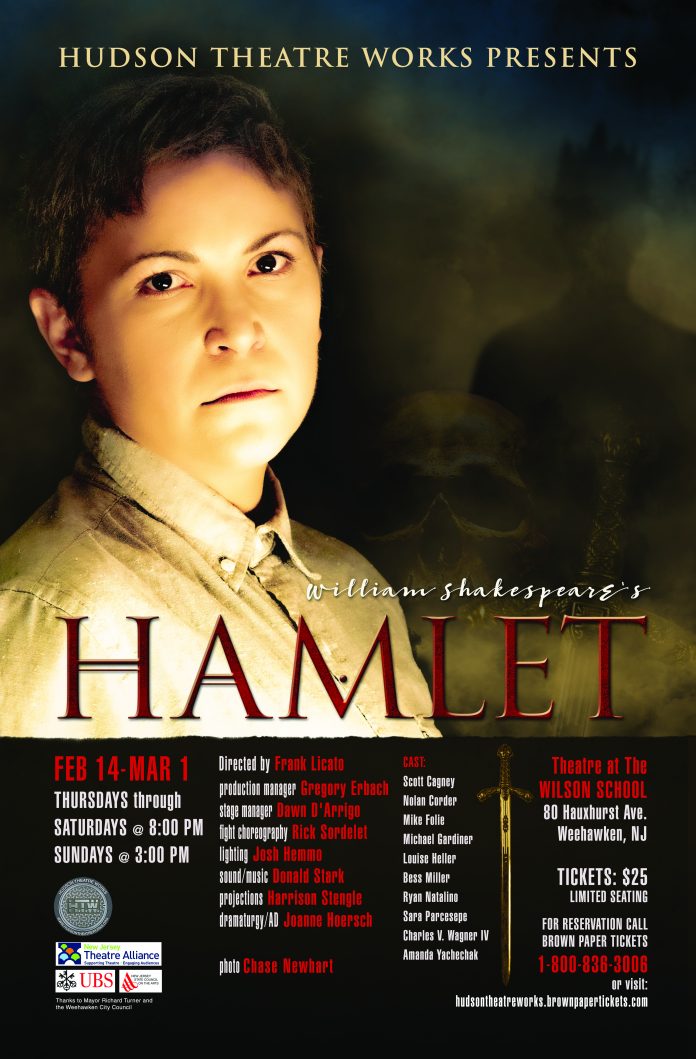 Prince Hamlet, heir to the throne of Denmark, is called home from his studies in Wittenberg, to attend the funeral of his father, the king, who has died suddenly. Already overwhelmed by grief, he soon discovers that his father was, in fact, murdered in his sleep by Hamlet’s uncle, Claudius, who has now married Hamlet’s mother and been crowned king.

With these single acts of treachery and deceit, the world that Hamlet knew so well, has disappeared, and become a broken mirror of itself.

Hudson Theatre Works once again brings to life a Shakespeare classic. After its successful run of Macbeth to inaugurate its new performing space at 80 Hauxhurst Avenue in Weehawken, Hudson Theatre Works takes on this most iconic of English language plays. Performing in its intimate space, 10 actors cover the full range of characters.

Performance dates are Feb. 13 – March 1, Thursdays through Saturdays at 8 p.m. and Sundays at 3 p.m. Tickets are $25.00 with Thursdays being pay what you can nights.

The cast features Bess Miller in the title role. Bess previously played Sonia in HTW’s innovative adaptation of Uncle Vanya, set at the Jersey shore, and was most recently, Richard III in the Blunt Ensembles’ all female cast.

Also in the cast is Charles F. Wagner IV as Claudius. Charles was most recently seen in HTW’s production of “A Steady Rain.” He was in the sold out Off-Broadway run of “The Great Society” and his regional credits include, Lt. Col. Jessep in “A Few Good Men” at Flatrock Playhouse.

Hudson Theatre Works is committed to low ticket prices, so everyone can enjoy live theatre. It celebrates ensemble collaboration as well as artistic risk through its permanent company, guest artists, partner institutions and the surrounding community. It is dedicated to a rugged aesthetic which seeks to tell stories, both new and old, classic and contemporary, that reflect our lives, relationships and the world today.

Hamlet is supported in part through gifts from the New Jersey State Council on the Arts, UBS Financial and the City and Mayor of Weehawken, New Jersey.

Hudson Theatre Works will present “Hamlet,” at the Theatre at the Wilson School, 80 Hauxhurst Ave. Weehawken. Previews will be on Feb.13 and 14 at 8 p.m., with opening night Feb. 15.,

Performances are Thursday through Saturday at 8 p.m. and Sundays at 3 p.m.