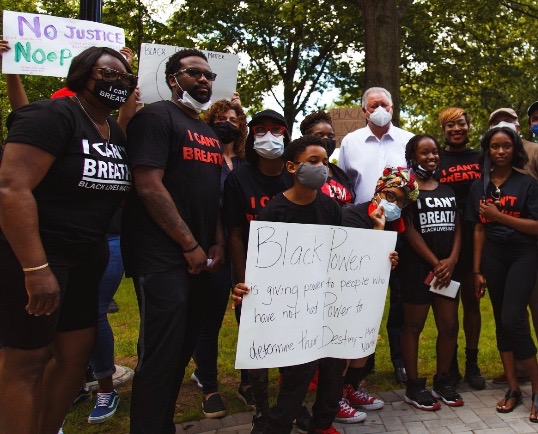 Following the success of the peaceful demonstration Power in the Park in Bayonne, a movement has begun.

Black in Bayonne, the local organization that orchestrated the Power in the Park event, is one of the groups in the city leading the charge against racial injustice, systemic racism, and police brutality.

Demonstrations have been erupting across the country in response to police brutality against African Americans, specifically the death of George Floyd by police. Floyd was an unarmed African-American man who was killed in Minneapolis when police officer Derek Chauvin held his knee on Floyd’s neck for nearly nine minutes.

Floyd was later pronounced dead. Chauvin has since been fired and charged with murder and manslaughter. In response to mass demonstrations, Chauvin’s charges were upgraded, and the other police officers on the scene have been charged with aiding and abetting second-degree murder in the commission of a felony.

Camille and Clarice are sisters. Camille and Shaniqua went to high school together. Three out of the four leaders are women from Bayonne.

In an interview with The Bayonne Community News, Camille, Clarice and Shaniqua, all Bayonne natives, described their efforts to make the voices of the black community heard in the city.

Shaniqua, a local business owner for the past four years, initially floated the idea of a protest in Bayonne.

Having protested alongside Camille and Clarise in other local cities, Shaniqua suggested they put together something within their own community. While having protested in Jersey City among other towns, they had not yet protested in Bayonne.

“Post George Floyd, things happened. Things changed,” Camille said. “The biggest thing for me was, we can go out, we can protest somewhere else. But when there’s things going on in our own community, how can we ignore and not speak up for the black community here.”

They collaborated to create Power in the Park.

From a photo shoot to a movement

Everything started as a photo shoot. Camille’s friend, Juanita Erwin, wanted to do a black excellence themed photo shoot to showcase and display positive things about black lives in Bayonne.

“The event was Power in the Park, and while we were curating that, it turned into the movement Black in Bayonne,” Camille said. “We plan on being the bridge and connecting the city with the black community.”

According to Black in Bayonne, there is no “real communication from the city to the black community.” And they are working to change that.

Black inclusion is necessary and will continue to happen as they continue to work with city hall, they said.

Black in Bayonne said that it is going to continue to do things their way, ala the peaceful demonstration in Hudson County Park. Other black activist groups have organized other protests, such as the march to city hall that followed Power in the Park.

Black in Bayonne’s primary goals are the curation of black inclusion programs as well as bridging the gap between city hall and the community.

A lot of the businesses that supported Power in the Park were black owned. Camille said this was the start of their efforts to identify and connect local businesses.

“Hopefully, that will encourage the black community in Bayonne to start their own businesses.”

The idea is that more black-owned businesses can support the local black community through events like Power in the Park, which can in turn help effect change.

Black in Bayonne is creating an event for black businesses.

Not just a moment

Black in Bayonne’s Facebook page offers an online space for the black community and they also have a presence on Instagram, and other social media.

Black in Bayonne was one of many Hudson County activist groups that opposed a resolution that would have purchased more than $26,000 in “riot gear” for the Hudson County Sheriff’s Department.

“The tale of a black story is not always pretty,” Camille said. “Sometimes it is ugly, and the fear of the unknown makes people scared and uncertain. But I don’t think we should be spending $26,000 in riot gear when we have an education system that needs more money.”

“It will take everyone in the community to make change,” Camille said. “This is not a moment. This a movement.”