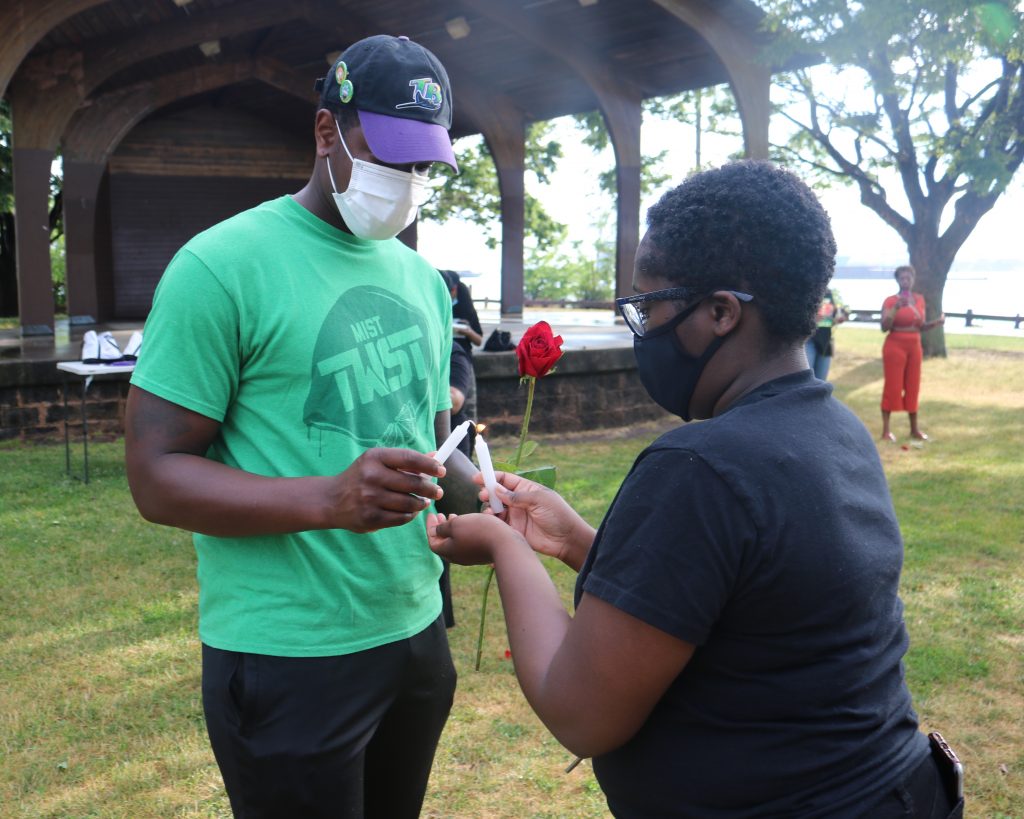 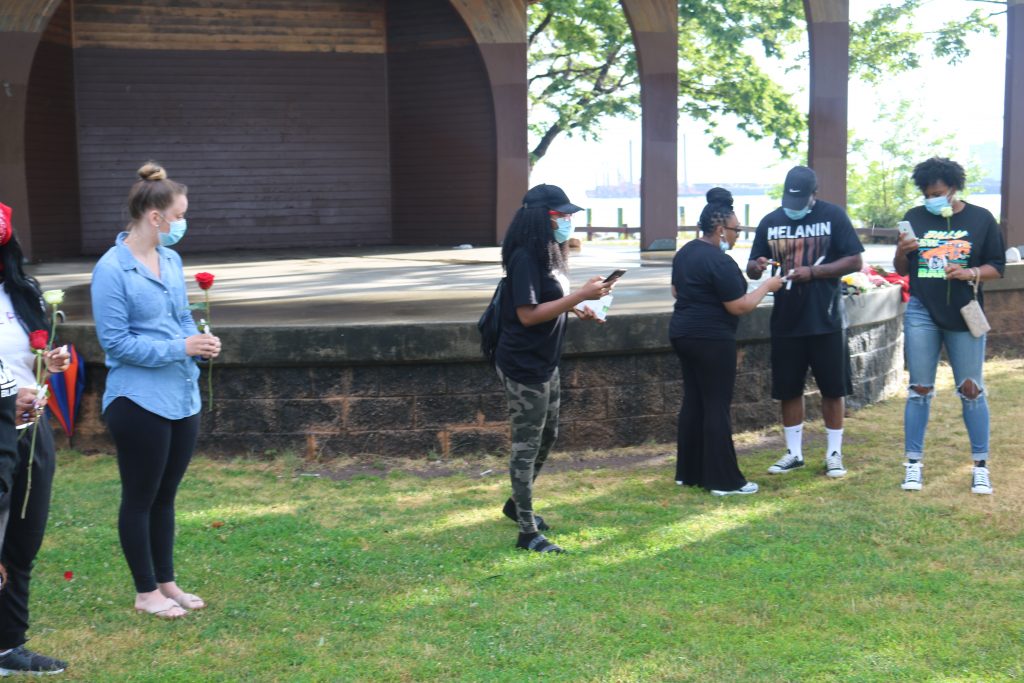 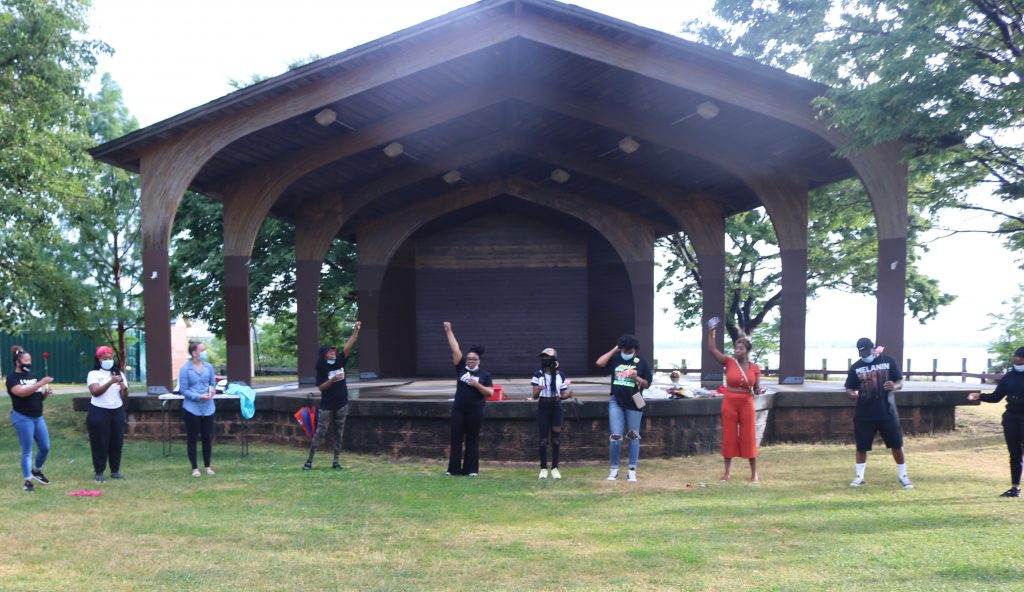 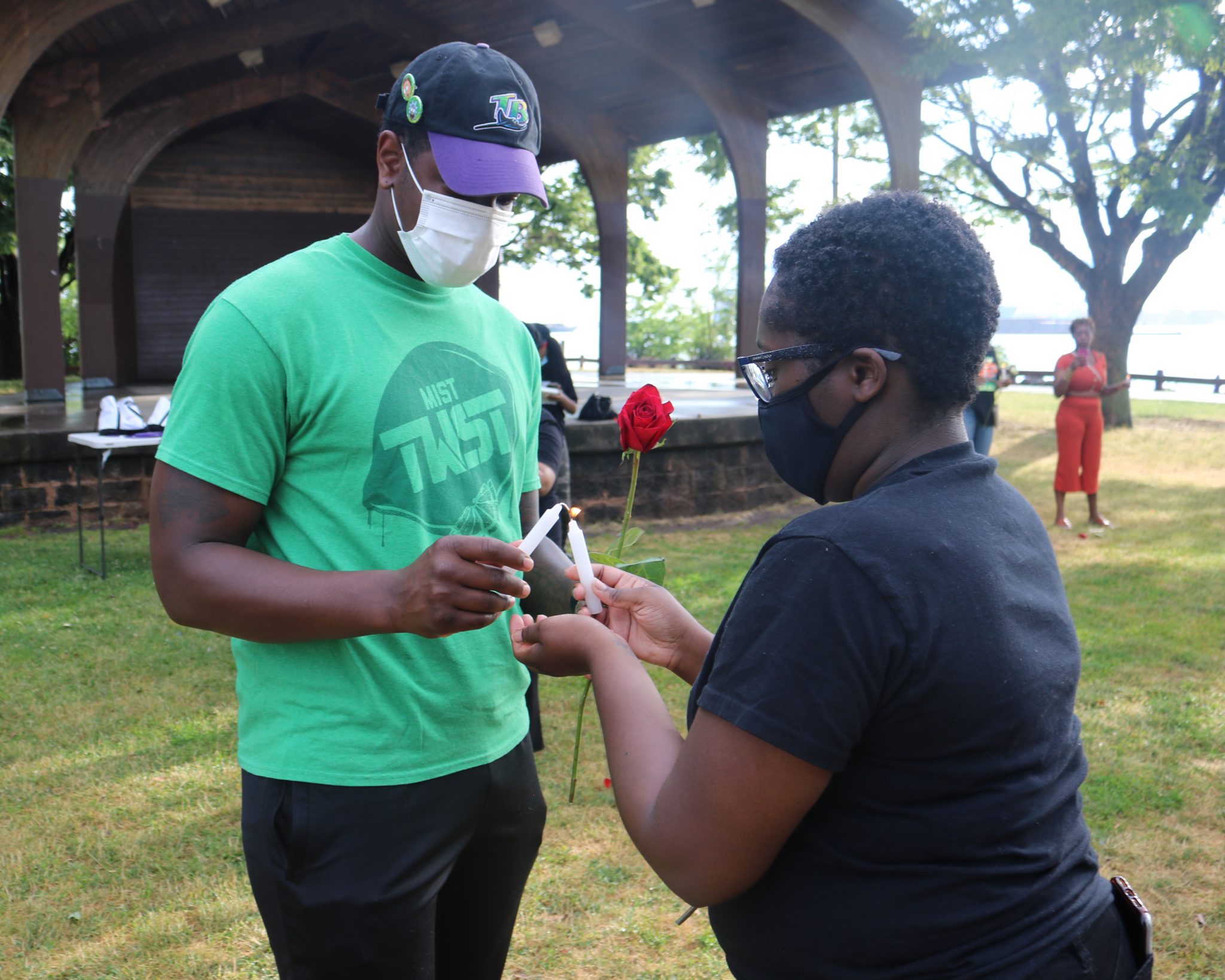 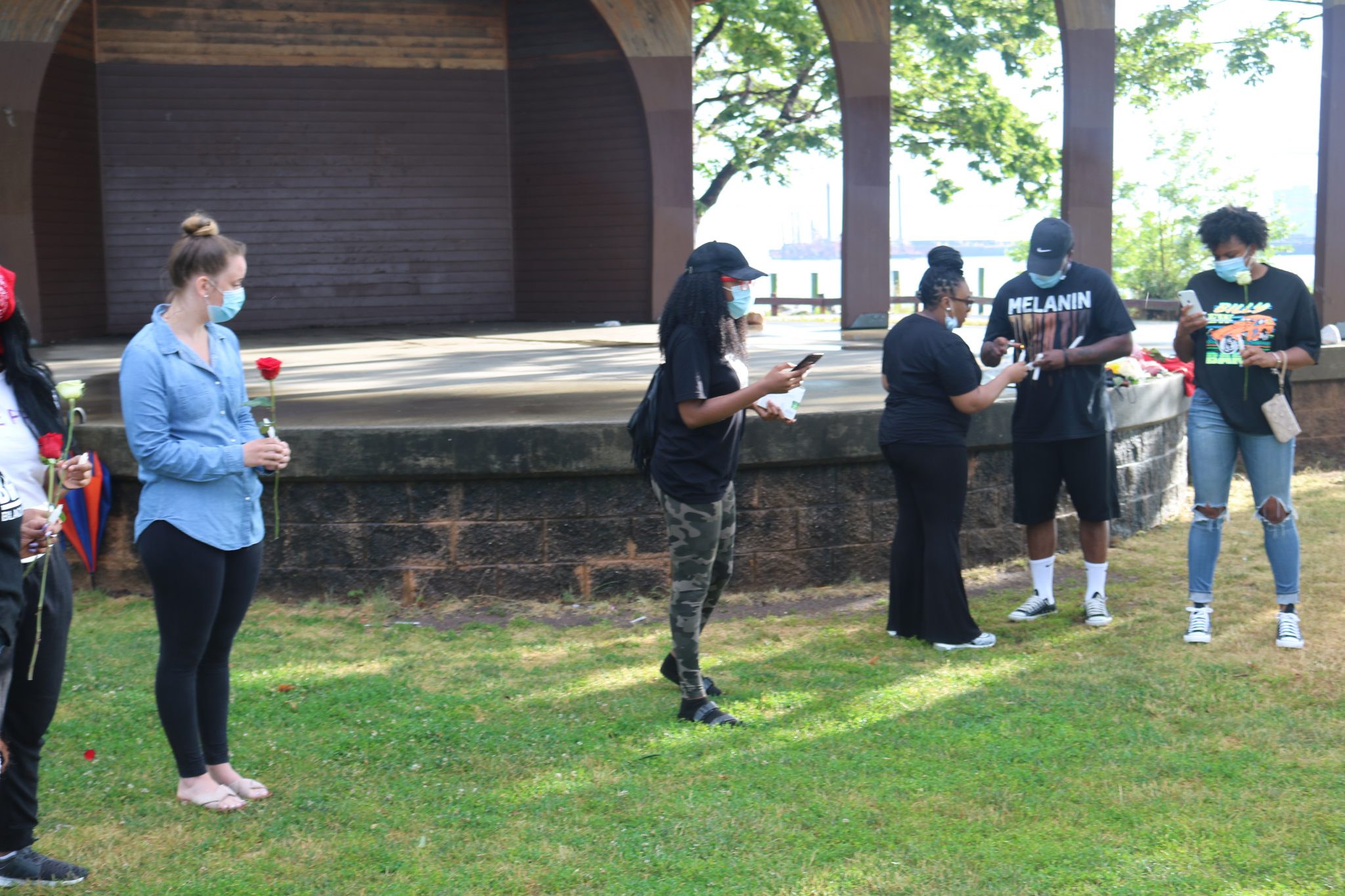 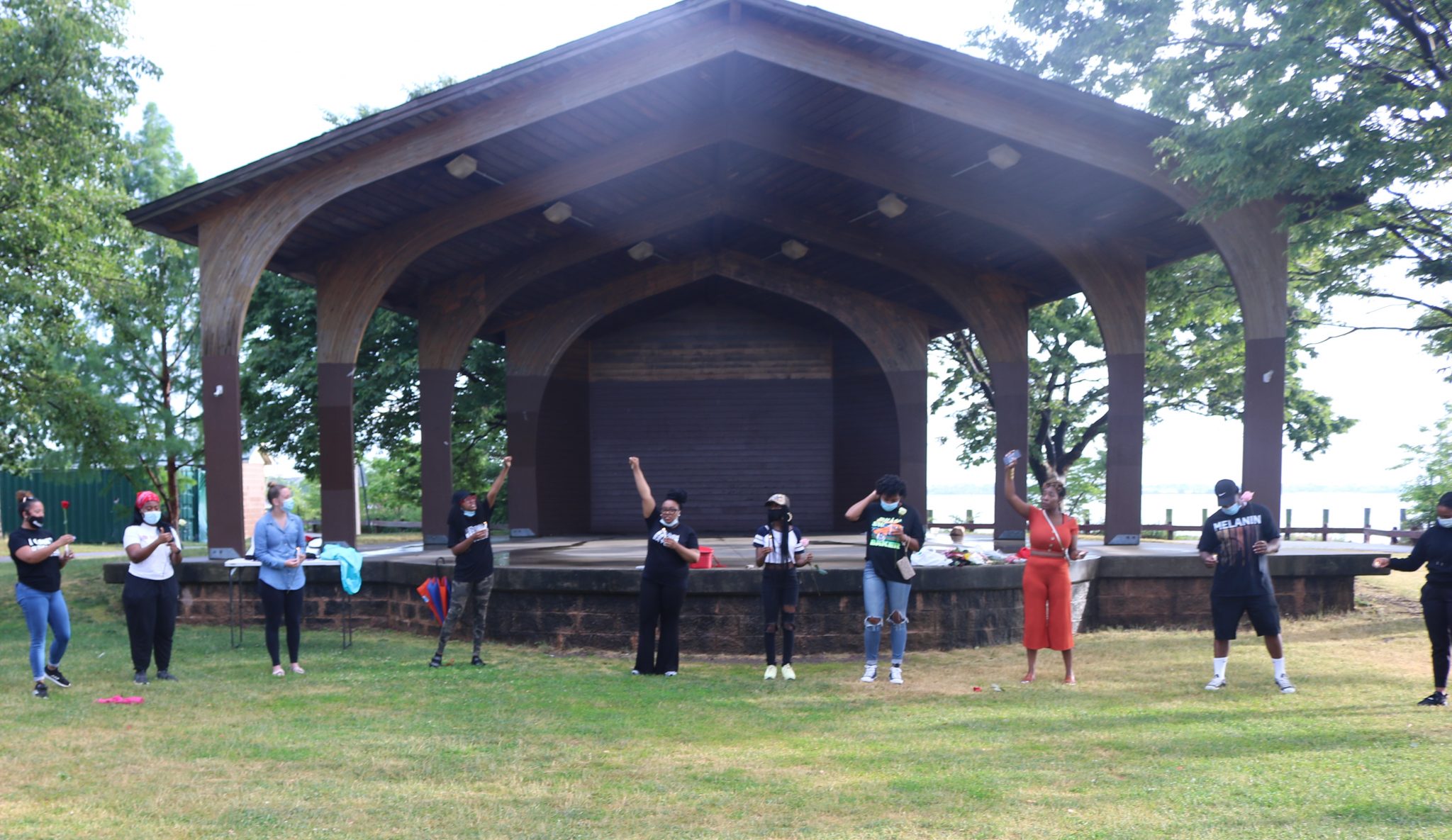 “We demand justice in all types of weather,” Camille High said, urging residents to come to a candlelight vigil at 16th Street Park despite the on-and-off rain showers on June 30.

Just as the vigil was set to start at 6 p.m., the rain stopped allowing residents to gather to honor the lives of black women such as Breonna Taylor.

Taylor, a 26-year-old emergency room technician, was shot eight times by Louisville police on March 13. The officers serving a ‘no-knock’ warrant, which allows police to enter a residence without warning or identifying themselves as police.

The warrant was granted after police alleged drugs were being sold out of Taylor’s apartment. No drugs were found. The officers involved, Brett Hankison, Jon Mattingly and Myles Cosgrove did not face any criminal charges.

For many, that isn’t enough. In Bayonne, residents are voicing their anger at the lack of accountability for Taylor’s killers.

Camille, a key member of local black activist group Black in Bayonne, is not backing down in demanding for justice for all black women.

The vigil, held at the amphitheater in the park, was in honor and memory of the lives of all black women lost to all forms of violence, not just police violence.

“Violence in the black community looks very different,” High said. “We wanted to make sure that we acknowledge all those who have been taken from us from various forms of violence whether it be police brutality, sexual assault, molestation, domestic violence, whatever it is.”

Dozens of residents came out in support for black women lost to violence in the United States.

The vigil started with a unity circle’ roses and candles were distributed to everyone.

Clarise High, another organizer from Black in Bayonne and Camille’s sister, addressed the crowd, reading statistics that illustrate the issues of violence black women face in this country.

Afterward Clarise read the names of the black women who have died and not received justice.

Camille lit her candle and then turned to the person next to her to light their candle. Each person did the same, spreading the flame as each candle around the unity circle was lit.

Clarise highlighted the importance of standing with and remembering transgender black women as well.

“Trans women aren’t treated and given the respect as everyone else,” Clarise said. “So when we are here saying the names, there are women who are trans on this list, and we honor them today.”

The vigil then moved to the nearby docks where roses and other flowers were tossed into the water. Everyone threw their roses in at the same time, shouting “Say her name!”

“We’ve got a lot of work to do, and this is only the beginning,” Camille said.

The solemn event was a symbol of the movement’s continuity and depth.

Clarise said there are a lot of people who have gone back to their normal routines, but that doesn’t mean the movement for black lives has stopped. As New Jersey copes with the COVID-19 pandemic, Clarise said that dealing with the pandemic of racism must be a part of the new normal.

WomenRising was at the vigil. The Jersey City-based agency is active in assisting women throughout Hudson County, and was on site to disseminate information and souvenirs with the domestic violence hotline.

Deban Tierney, Development and Communications Coordinator for WomenRising, spoke about the resources for women, one of the most important being the hotline: (201) 333-5700.

Black in Bayonne urged residents to attend the next Bayonne Board of Education meeting and make their voices heard, with the goals of hiring more black educators and speaking out against racist comments by Trustee Michael Alonso.

The next meeting is on July 27, in-person at Bayonne High School and streamed online at bboed.org.