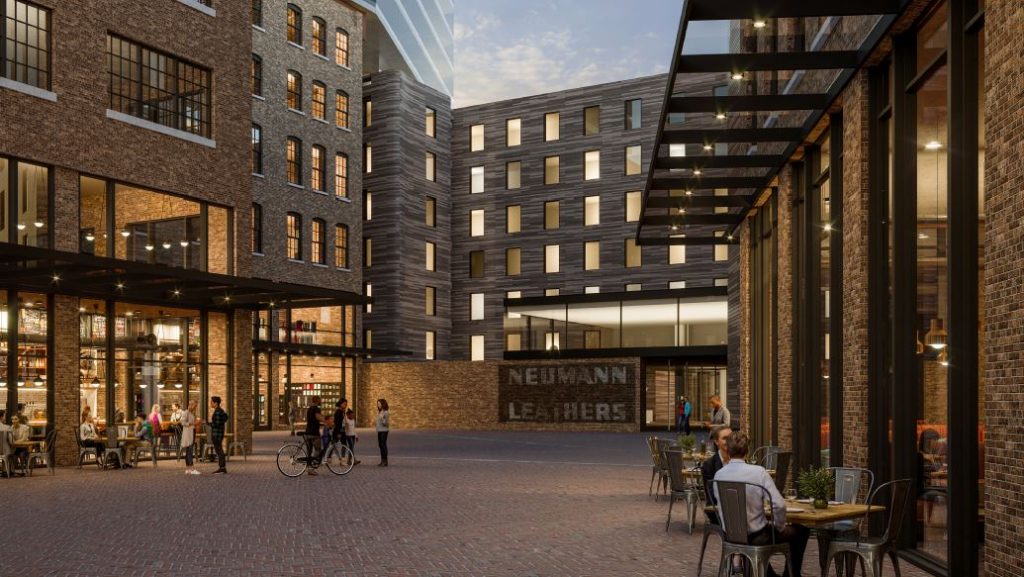 310 residential units, including workforce and affordable housing units are included in the proposed Neumann Leathers Redevelopment Plan amendments introduced by the council unanimously.
× 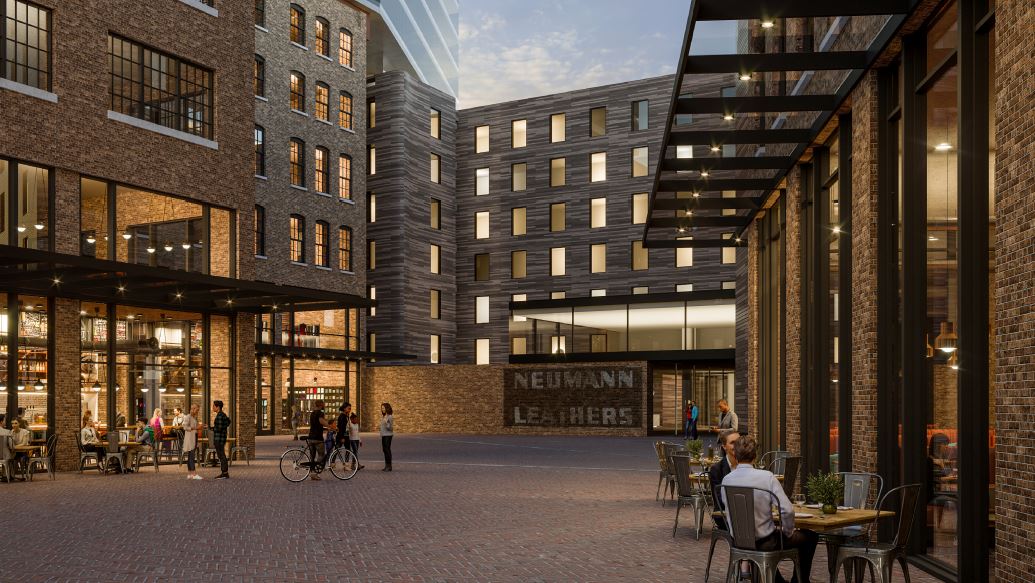 310 residential units, including workforce and affordable housing units are included in the proposed Neumann Leathers Redevelopment Plan amendments introduced by the council unanimously.

The Hoboken City Council introduced amendments to the Neumann Leathers Redevelopment Plan, which proposes to preserve and rehabilitate 118,000 square feet of the historic Neumann Leathers Building along Observer Highway.

The plan dictates how approximately 3.29 acres of land, surrounded by Observer Highway, Newark Street, and Willow Avenue, could be developed, outlining design standards for all new and rehabilitated buildings.

R. Neumann and Co. was founded in 1863 as a producer of fine leather and leather goods.

The original four-story factory was constructed on the northwest corner of Willow Avenue and Ferry Street, known today as Observer Highway.

Although leather production ceased in the last century, descendants of the original Neumann family owned and operated the buildings until 2014.

Since the 1980s, the complex has become a hub for small businesses and artists.

The Hoboken Department of Community Development and city council sub-committee have been negotiating with the property owner, Neumann Leathers Redevelopment Group, since 2016 on the details of the redevelopment project.

Now the council has voted to introduce amendments to the plan, reflecting the negotiations.

According to the city, the amended plan seeks to retain and enhance the existing industrial arts community in the Neumann Leathers Building, while constructing new, mixed-use properties.

The proposed amendments include the construction of 310 new residential units, the reconstruction of two mixed-use buildings in accordance with historic standards, and 204 parking spaces.

“After years of negotiation, I’m pleased that Hoboken has finally produced a revised plan that not only preserves one of Hoboken’s most historic areas and supports our vibrant arts community, but also provides substantial community benefits, including new, mixed-use retail areas and public open space,” said Mayor Ravi Bhalla. “This plan is a win for our City and I thank the Office of Community Development for their hard work, as well as the council sub-committee members for their assistance.”

“Hoboken has seen its share of cookie-cutter development over the last few decades, and I’m proud to say our plan for the Neumann Leathers Complex breaks that mold,” said First Ward Councilman Mike DeFusco who chairs the Southern Development Subcommittee. “This innovative adaptive reuse elevates makers, creators, artists and innovators while respecting the needs of the surrounding community. Just like Ponce Market in Atlanta, or Union Station in Denver, Neumann Leathers will remain a landmark in Hoboken for generations to come.”

To read the proposed amendments to the Neumann Leathers Redevelopment Plan go to https://tinyurl.com/2rrx8f39.

Hoboken will host a virtual public meeting on the plan and proposed amendments on March 8 at 7 p.m.