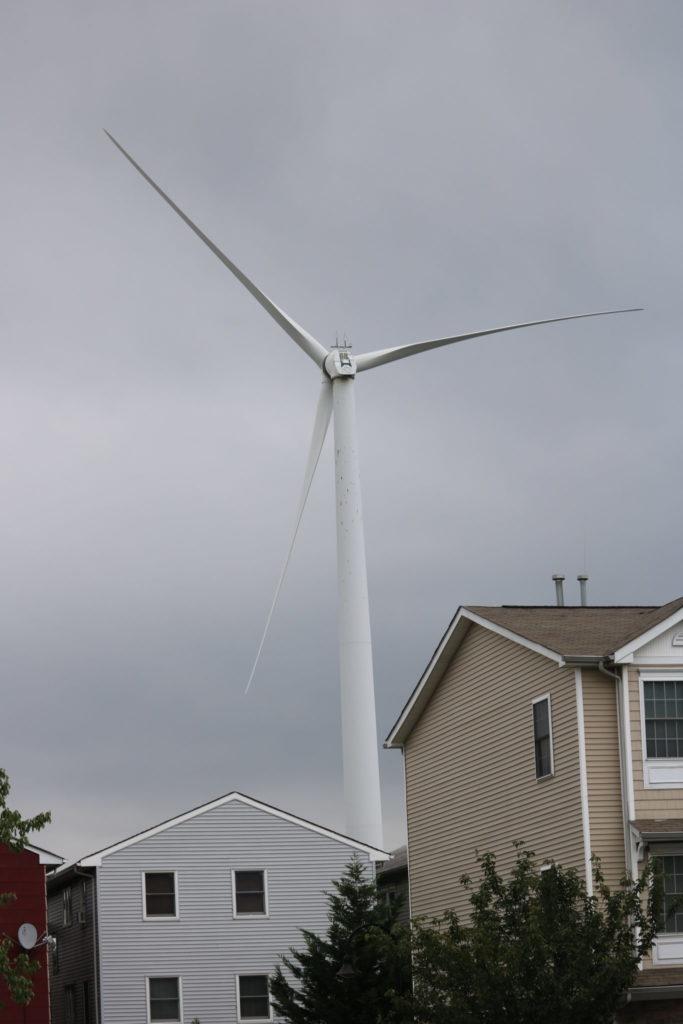 1 / 2
The wind turbine is becalmed as a broken generator has rendered it inoperable. Photos by Daniel Israel 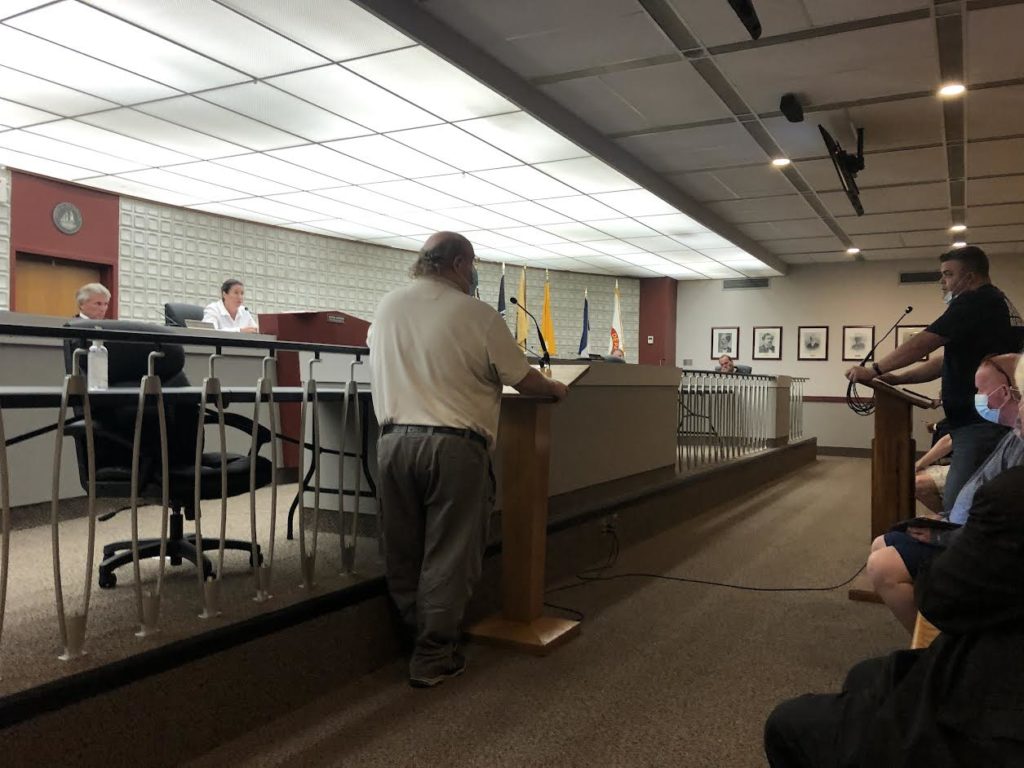 2 / 2
The council and members of the public grilled now-former Municipal Services Director Tim Boyle over the broken wind turbine.
×

1 / 2
The wind turbine is becalmed as a broken generator has rendered it inoperable. Photos by Daniel Israel 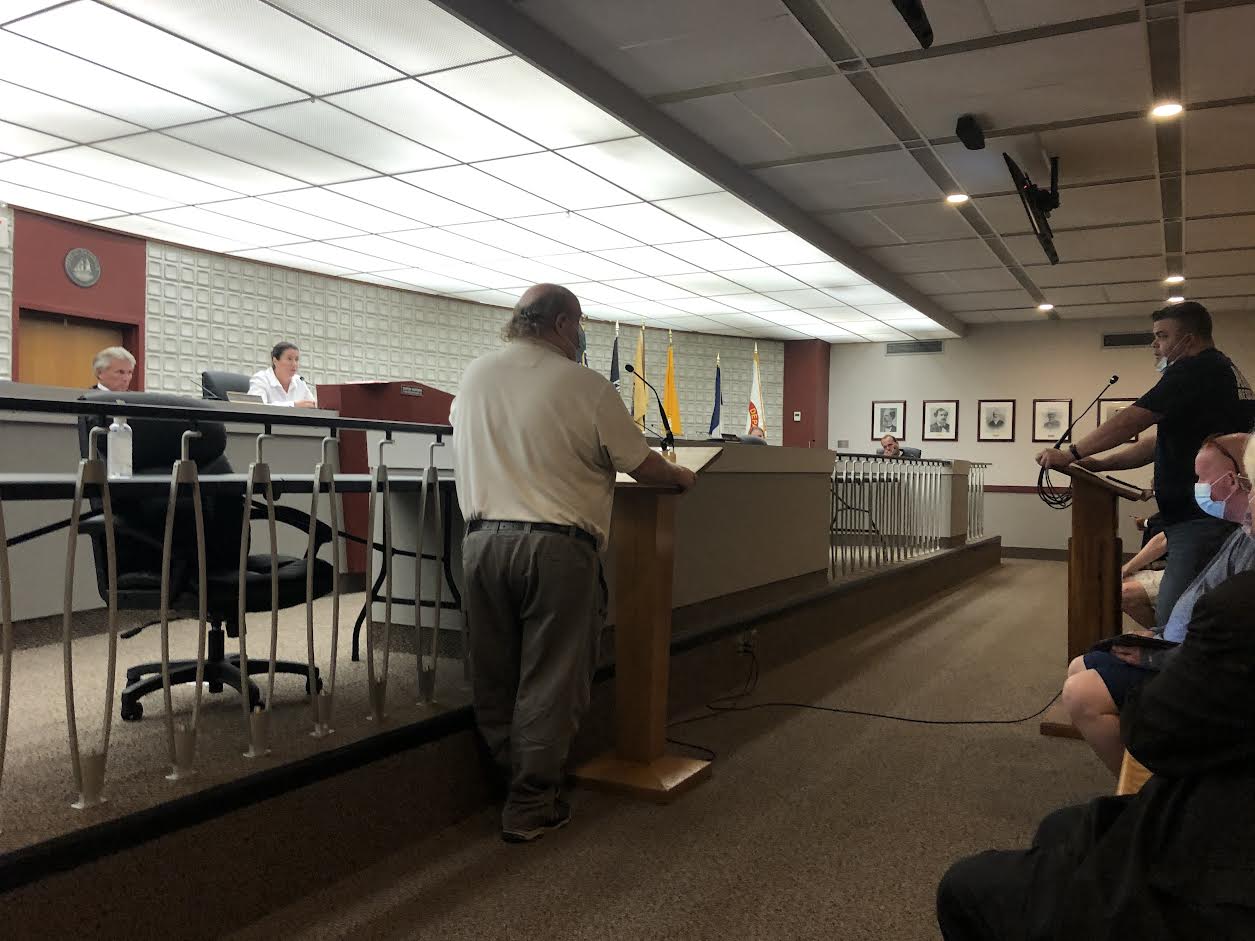 2 / 2
The council and members of the public grilled now-former Municipal Services Director Tim Boyle over the broken wind turbine.

Bayonne’s dysfunctional and out-of-operation wind turbine is again the talk of the town. For 15 months, a “bad generator” has kept its massive blades from spinning and producing clean energy, and that has residents frustrated.

At the September city council meeting, some questioned why the wait. In response, the council probed now-former Director of Municipal Services Tim Boyle as to why the city is still negotiating with the manufacturer to fix the generator.

Boyle told the council: “There is a maintenance contract. We are interpreting it one way. They are steadfastly interpreting it another way. So when we can’t agree, hand off to the attorneys, and they start going back and forth. It is a lengthy process, and it’s nowhere near its conclusion… These types of negotiations do take an extended period of time… If they are not able to come to an agreement with each other, we’ll go to the next step.”

According to Boyle, the next step would be arbitration in a court of law: “We would then effect a lawsuit against them claiming breach of contract. Then that would have to be negotiated through the courts.”

Resident Frank Donovan again asked why this is taking so long: “I’ve been involved in negotiations in the past, and I’ve run into problems such as you’re saying. But we’ve completed them and in a much more timely fashion then we’re talking about here. I just don’t understand why it’s taking this long.”

In response, Boyle said: “It’s complex. And that is the explanation if you want to accept it.”

Boyle also revealed that the costly maintenance contract was no longer in effect, despite his previous assertions that it was.

“The contract is in suspension right now,” Boyle said. “The contract became suspended when it wasn’t renewed. It wasn’t renewed because we were in disagreement on this topic. Since the windmill is not operational, there’s no sense in having a maintenance contact.”

The turbine has been out of operation, and thus the $100,000 maintenance contract has been suspended for the past 15 months, Boyle said.

City Council President Sharon Ashe-Nadrowski opposed negotiations with outside companies regarding the turbine, adding that she was not in the loop.

“I’m not passing the buck, but I’m not aware of the city negotiating the sale of that,” Ashe-Nadrowski said. “I don’t believe we authorized that. It would have to come through the council.”

While Boyle previously told the Bayonne Community News that the city was in negotiations with entities other than Leitner-Poma to sell the turbine, at the meeting he told the council that the negotiations were with other companies to replace the “bad generator” as opposed to purchasing the whole unit.

“In regards to negotiating with other companies, during the course of the investigation, it became obvious to us that in keeping the same tower, there is a possibility that we could replace it with a different generator,” Boyles said. “The benefit of that would be that it would get us away from [Leitner-Poma of America], the company that we’re having problems with. The other interest in doing that is because there are other companies in the area that also have an interest in wind energy. If we could wind up with a scenario where there were three or five windmills in the area, all of the same type, that we felt was an avenue worth exploring, which is what we are doing… We are absolutely exploring other ways of handling that turbine, something that has been so problematic.”

Despite referring to the proceedings as negotiations, Boyle said that they weren’t that but rather “exploratory conversations.”

“We’re not in negotiations with anybody,” Boyle said.

Boyle countered that things are “not that far down the pathway” to involve the council yet. If the “exploratory conversations” progress further, then the council would become involved.

“When and if it gets to a point where it looks like we want to head in that direction, then through the administrator we would make those desires known,” Boyle said. “That is when the city council would become engaged in that. They would enter into the conversation to see if they agreed with the path we were traveling on or if there was some edits that they would like to make to the approach that we’re taking. When the council votes on it, we would go the next step.”

According to Boyle, the “administrator’s office” is aware of these “exploratory conversations.”

Ashe-Nadrowski wondered how much money the city is losing because the turbine is out of operation and if the lawyer fees are adding up from all the negotiations. She said the council could stop the spending: “We actually do have the authority for resolutions stopping spending on certain things.”

“There’s a question of when it’s feasible,” Ashe-Nadrowski said. “We’re losing money on it now. It’s an asset, but it’s costing us money.”

Boyle said the city would normally save up to $325,000 a year when the turbine is operational, before maintenance costs. He told the council that outside counsel Rainone, Coughlin, and Michello is handling the negotiations, the law firm already hired by the council for $60,000, and that no other spending on legal fees had occurred.

As to those becalmed blades? The answer may be blowin’ in the wind.