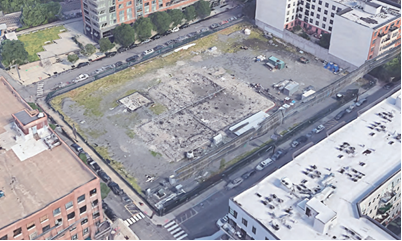 The City of Hoboken will launch an open public process to create concept designs for the City’s fourth resiliency park at 800 Monroe St. in March 2022
×

The City of Hoboken will launch an open public process to create concept designs for the City’s fourth resiliency park at 800 Monroe St. in March 2022

Mayor Ravi S. Bhalla and the City of Hoboken have announced the search for a qualified consultant to engage in an open public process for the design of the city’s newest resiliency park planned for 800 Monroe St.

“The city has taken an innovative approach to provide our residents with more quality open space that also serves the dual purpose of making our mile-square community more resilient to the effects of climate change,” said Mayor Bhalla. “I look forward to working with the community on creating a multi-faceted park for all residents to enjoy.”

The 1.43-acre property is envisioned as a world-class resiliency park and community space that will be integral to the neighborhood, mitigate rainfall flooding in western Hoboken, and connect the Green Circuit as detailed in the city’s Master Plan.

The selected consultant will work with the city, community stakeholders, and the public at large to create design alternatives for the site incorporating innovative active recreation, passive recreation, cultural amenities, landscapes, resiliency components, and urban design.

There will be multiple opportunities for public engagement and a project website for members of the public to stay informed throughout the design process. The park’s design will also complement the character of the existing neighborhood and the 7th & Jackson Resiliency Park, which the city opened in 2019, that can detain more than 470,000 gallons of stormwater runoff.

The city acquired the property, bounded by Monroe Street to the west, 8th Street to the south, Jackson Street to the east, and the residential building to the north, through a three-way land swap agreement with the Applied Parties earlier this fall.

Prior to the city’s execution of the agreement, the site was slated to be developed for multifamily residential use, and currently sits vacant.

The city is currently constructing its largest resiliency park, the 6-acre Northwest Resiliency Park, which will manage 1 million gallons of stormwater in underground detention and up to 1 million gallons using surface green infrastructure.

Cities join to cycle with Lyft and Citi Bike